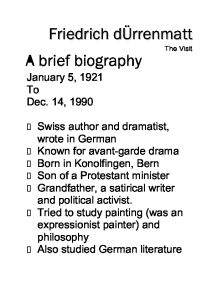 Friedrich d�rrenmatt The Visit A brief biography January 5, 1921 To Dec. 14, 1990 ? Swiss author and dramatist, wrote in German ? Known for avant-garde drama ? Born in Konolfingen, Bern ? Son of a Protestant minister ? Grandfather, a satirical writer and political activist. ? Tried to study painting (was an expressionist painter) and philosophy ? Also studied German literature ? Gave up academics to begin a career as a writer ? For a time he was also a theatre critic ? He wrote an essay called "Theatre Problems" which it is important for us to examine ? It explicates his idea of theatre Theatre Problems ? "I want to ask you also not to regard me as a representative of any particular movement in theatre....For me, the stage is not a field for theories, philosophies, and declarations, but an instrument, the possibilities of which I seek to know by playing with it." ? "It is not Aristotle's unities that make Greek tragedy possible, it is Greek tragedy that makes Aristotle's unities possible." ? Talks of the concept of "backstory" which supports the unities. He says, "Greek tragedy had the advantage of not having to invent a backstory, because it already had one: the spectators knew the myths that were enacted on stage..." ...read more.

Only lll has found freedom, and he has attained it only by a withdrawal from the community into death." The characters ? Only Ill achieves the stature of the tragic hero - he attains self-knowledge - and is transformed by the acceptance of his guilt ; ? He brushes aside their offer that he commit suicide - he forces the town to accept their share of the blame and their responsibility for his death; ? Claire remains static in her need for revenge; The Visit * Act 1 ends with an ominous announcement from Claire Zachanassian, "the relentless avenger". She had been victimized, now she plays the oppressor; * She reveals her sinister plan of vengeance in her offer to the poverty-stricken Guelleners: ? "A milliion for Guellen if someone kills Alfred Ill." p. 38 * Alfred Ill has been duped by Claire's sentimental journeys into their past haunts, forty-five years ago, in Guellen. The impact ? He sees her as an old lover, who still has a place in her heart for him. ? Dramatic irony marks the play from the very beginning. ? The people of Guellen expect their rescue from abject poverty by Ill; ? ...read more.

? The idea of justice forms the major theme in the play; ? Claire did not receive justice - she was cheated, the justice given to her was false; ? The mayor's reaction, much to the relief and applause of the town - rejection of the offer in the name of humanity. ? Claire waits - and the black comedy begins: Act 2 ? The people of Guellen choose to act according to a philosophical notion of justice - to let Ill live and therefore they can enact a tragedy of self-sacrifice; ? Citizens of Guellen lose transcendent values and given in to material longings; ? Justice is reduced to personal conscience which can legitimate nothing and everything; ? They treat Ill not as a subject but as a means to an end. Act 2 ? A comic angle is introduced focussing on appearance and reality; ? The dualism of the people of Guellen is revealed; ? So is the schism between their rhetoric and action; ? and eventually their blindness and fickleness; ? Guelleners convince themselves that the collective murder is in the service of the ideal form of jusctice. ...read more.