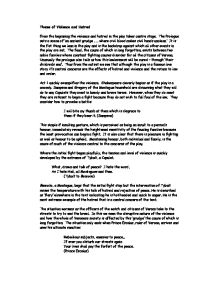 Theme of violence and hatred in Romeo and Juliet

Theme of Violence and Hatred From the beginning the violence and hatred in the play takes centre stage. The Prologue sets a scene of 'an ancient grudge . . . where civil blood makes civil hands unclean.' It is the fist thing we lean in the play and is the backdrop against which all other events in the play are set. The feud, the cause of which is long forgotten, exists between two noble families whose constant fighting causes disorder for all the citizens of Verona. Unusually the prologue also tells us how this lawlessness will be cured - through 'their children's end'. Thus from the outset we see that although the play is a famous love story it's central concerns are the effects of hatred and violence and the return to law and order. Act 1 quickly exemplifies the violence. Shakespeare cleverly begins as if the play is a comedy. Sampson and Gregory of the Montague household are discussing what they will do to any Capulets they meet in bawdy and brave terms. However, when they do meet they are reticent to begin a fight because they do not wish to fall foul of the law. They consider how to provoke a battle: I will bite my thumb at them which is disgrace to them if they bear it. (Sampson) ...read more.

It is not in his nature to let things go and he is the main participant in the violence in the first half of the play. Even in the midst of love hate is always present in the play. Act 2 Scene 2 is the famous balcony scene. It is full of the language of love and light: But soft, what light through yonder window breaks? It is the east and Juliet is the sun. Romeo compares Juliet to the sun, the source of life. It is if he alive for the first time. Yet, in contrast it is also a scene full of underlying violence and death underlined by Juliet's warning 'If they do see thee they will murder thee'. She is afraid Romeo will be discovered by her kinsmen and has no doubt what will happen. The danger they are in as a result of their families' hatred if they pursue their love is thus emphasised. The result is they are forced into the secrecy that creates much of the dramatic irony of the play. The theme of violence is also underlined in the Friar's words to Romeo as he arranges the marriage of Romeo and Juliet that describe the depth of passion that Romeo and Juliet feels for each other: These violent delights have violent ends The words allow us to see love in a different light. ...read more.

. . Put not another sin upon my head. The language mirrors that of other duelling scenes where insults were based on claims to manhood. In the end he is forced to kill Paris, as Paris will not back down. The violence occurs once again because of the unreasoning hatred of feud. However, Romeo's actions when he discovers who Paris is are compassionate as he places him with Juliet in the tomb. This foreshadows the way in which love can overcome hatred and create reconciliation. The final acts of violence in the play are done out of love but are the result of hatred. Romeo poisons himself while Juliet stabs herself with a knife. The secrecy and intrigue forced on the lovers by the hatred of their families destroys them in the end by their own hands. Mischance leads to mistiming and misunderstanding through which the lovers fulfil their destinies as symbols of a love so deep that it crosses the divide of hatred. In destroying themselves they destroy the feud. Hatred and the violence it causes form a backdrop to the play. It brings about five unnecessary deaths and forces true love into hiding and the ultimate self- sacrifice. In the end both are overcome but the cost is not only the waste of young lives but the destruction of the noble households. Law and order may be restored but the cost of the lives of Romeo and Juliet was high price to pay. ...read more.