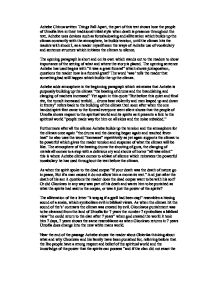 Achebe Chinua written Things Fall Apart, the part of this text shows how the people of Umofia live in their traditional tribal style when death is presence throughout the text, Achebe uses devices such as foreshadowing and alliteration which builds up the climax constantly with the atmosphere, he builds tension, until the climax hits the readers with shock I, as a reader myself seen the ways of Achebe use of vocabulary and sentence structure which initiates the climax to silence.

The opening paragraph is short and on its own which stands out to the readers to show importance of the setting of what and where the story is placed. The opening sentence Achebe has used begins with “it was a great funeral” which shows juxtaposition, questions the reader how is a funeral great? The word ‘was’ tells the reader that something bad will happen which builds the up the climax.

Achebe adds atmosphere in the beginning paragraph which reinstates that Achebe is purposely building up the climax “the beating of drums and the brandishing and clanging of machets increased” Yet again in this quote “But before this quiet and final rite, the tumult increased tenfold… drums beat violently and men leaped up and down in frenzy” refers back to the building of the climax then soon after when the one handed spirit first came to the funeral everyone went silent shows that the people of Umofia shows respect to the spiritual world and its spirits as it presents a link to the spiritual world “people made way for him on all sides and the noise subsided.”

Furthermore after all the silence Achebe builds up the tension and the atmosphere for the climax once again “the drums and the dancing began again and reached fever-heat” he also uses the word “increases” repetitively as yet again supports the climax to be powerful which gives the reader tension and suspense of what the climax will be like. The atmosphere of the beating drums the shooting of guns, the clanging of metals all comes to a stop with a delirious cry and shouts of horror “all was silent” this is where Achebe climax comes to a blast of silence which reinstates the powerful vocabulary he has used throughout the text before the climax.

As when the spirit spoke to the dead corpse “if your death was the death of nature go in peace, But if a man caused it do not allow him a moments rest.” And just after the death of his son it questions the reader does the dead corpse want to be with his son? Or did Okonkwo in any way was part of his death and wants him to be punished as what the spirits had said to the corpse, or was it just the power of the spirits?

The alliteration of the s letter “it was as if a spell had been cast” resembles a hissing sound of a snake, which symbolizes evil in biblical views. As when the climax hit the sound of the‘s’ contrasts the climax was created by evil. Okonkwos punishment was to be cleansed from the land of Umofia for 7 years the number 7 symbolizes a biblical view “he could return to the clan after 7 years” when god created the world it took him 7 days, 7 years shows the same resemblance as when Okonkwo returns in 7 years Umofia does change into the new white mans world.

Near the end of the passage Achebe shows the reader about Obierika thinking about what and why Okonkwo and his family have been punished for, referring before that the Ibo people have a strong respect and belief of the spiritual world and the knowledge of the power that the spirits can possess “and if the clan did not exact the punishment for an offence against the great goddess, her wrath was loosed on all the land and not just on the offender” which portrays the Ibo people of the spiritual world.