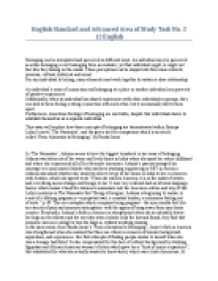 This essay will explore how these concepts of belonging are demonstrated within Jhumpa Lahiris novel The Namesake, and the given text for comparison which is an article called From Alienation to Belonging, by Randa Jarrar.

﻿English Standard and Advanced Area of Study Task No. 2 12 English ________________ Belonging can be interpreted and perceived in different ways. An individual may be perceived as either belonging or not belonging from an outsider, yet that individual might, or might not feel like they belong on the inside. These perceptions can be shaped into four main contexts; personal, cultural, historical and social. For any individual to belong, many elements must work together to sustain a close relationship. An individual?s sense of connection and belonging to a place or another individual can grow out of positive experiences. Additionally, when an individual has shared experiences with other individuals or groups, they can lead to them feeling a strong connection with each other, but it occasionally drives them apart. Furthermore, sometimes feelings of belonging are inevitable, despite that individuals desire to establish themselves as a separate individual. This essay will explore how these concepts of belonging are demonstrated within Jhumpa Lahiri?s novel ?The Namesake?, and the given text for comparison which is an article called ?From Alienation to Belonging?, by Randa Jarrar. In ?The Namesake?, Ashima seems to have the biggest turnabout in her sense of belonging. Ashima was taken out of her warm and lively home in India where she spent her entire childhood and where she experienced all of her favourite memories. ...read more.

The mirrors are used as an extended metaphor from which we can deduct that in finding more information about her own culture, she has found out more about herself. Having found bits of her past in books, she now feels as if she is not alienated from the country, and belongs to a large group of Arab-American living in America. During Gogol?s life, he experiences many failed relationships. One of his longer relationships was with a girl named Maxine who he met at a party. While living with Maxine?s family, Gogol becomes accustomed to their American way of life and enjoys it, since even though he was born in America, he never experienced the full American lifestyle. He enjoys the freedom and differences between the two cultures. When Gogol?s father passes away from a heart attack, he begins to spend more time with his mother and sister during the mourning period which is an important part of Bengali tradition. Maxine pressures Gogol to open up for her, but he doesn?t want to talk to anyone during this time. Maxine cannot accept Gogol?s traditions and the severity of what had happened so they break up. After some time had passed, Ashima suggests for Gogol to meet up with her friends daughter, Moushumi, who is also from a Bengali family. ...read more.

This then changes when Gogol?s father, Ashoke, abruptly passes away from a heart attack and Gogol realises that he was neglecting his family traditions and so he in turn, shaves his head which he had seen his father do when his father died which is a tradition. Gogol begins to spend much more time with his mother and sister despite his desire to be a separate individual. Even though Jarrar is such a strong individual, she is obviously compelled by the need to find others who have similar experiences. She ?spent hours? looking up contemporary books by Arab Americans? and even studied Egyptian and African-American woman?s fiction when she could not find any from her own culture. When she eventually stumbles upon the book called Arabian Jazz, she realised that it was about Arab-Americans and this restored her faith in there being others like her in America. She was ?thrilled at the resonance?, and astounded that after a long time of searching she finally found her identity. Thus we can conclude through reading Lahiri?s novel ?The Namesake? and Randa Jarrar?s article ?From Alienation to Belonging? that belonging is quite a complex concept. When all the elements of a relationship work together, then it will surely be a long and joyful relationship. Sometimes shared experiences lead to a strong and happy relationship within a couple or group, but it may also lead to a sad ending when there is nothing else to hold the relationship together. By Luka Dencic, 12 English 2 ...read more.