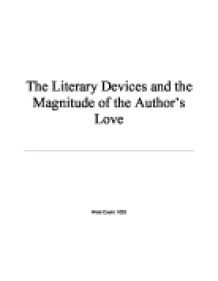 Through Sonnet XLVI, Pablo Neruda uses literary devices to talk about his journey of finding his wife and his happiness with his decision.

The Literary Devices and the Magnitude of the Author's Love Word Count: 1033 In the Sonnet XLVI, author Pablo Neruda describes the love he has for his wife and his happiness due to his choice of picking her over any other woman. He uses literary devices such as imagery, repetition, metaphors to convey the magnitude of his love. In Sonnet XLVI the narrator starts by talking about the stars he admired and the various rivers with their misty features (1-2). He then goes on to talk about the multiple waves he encounters and his choice of only one in the second stanza (5-9). In the third stanza, Neruda mentions rain and the infinite amount of water drops associated with it. Light, which is a natural phenomena that seems to be infinite, is also talked about. Nature is a recurring theme in Sonnet XLVI and helps to convey the author's message that his love for his wife is plentiful because all the nature references mentioned in the sonnet are vast and expansive. ...read more.

Neruda concludes the stanza by mentioning that he only chose the one wave that is his wife. He uses the metaphor "the indivisible wave of your body" to compare his wife's body to a wave that did not break. Indivisible waves are long and lean, so comparing his wife's body to one is a comment on how attractive he thinks she is. The third stanza describes Neruda's coming to his senses in choosing his wife out of all the other possible women. He is like a tree that matured in that all the water drops, roots, and light gathered to him sooner or later. The combination of factors made him grow into the person he is and realize whom his soul mate was. Neruda says that all the factors came "sooner or later" to show that he and his wife were meant to be because even though he had been searching for the right one, it was fate that brought them together eventually and his searching was futile. The fourth stanza is the conclusion of Neruda's profession of love toward his wife. ...read more.

The first two stanzas summarize his search to find his wife. The last two stanzas summarize his feelings after he chose his wife. Through Sonnet XLVI, Pablo Neruda uses literary devices to talk about his journey of finding his wife and his happiness with his decision. These literary devices include the imagery of the stars shows his admiration for his wife; the repetition of the phrase "I choose only" reinforces the idea that his wife is the only woman he loves; and the metaphors, such as "the indivisible wave of your body" (8) show that the narrator is truly in love with his wife. XLVI by Pablo Neruda Of all the stars I admired, drenched in various rivers and mists, I chose only the one I love. Since then I sleep with the night. Of all the waves, one wave and another wave, green sea, green chill, branchings of green, I chose only the one wave, the indivisible wave of your body. All the waterdrops, all the roots, all the threads of light gathered to me here; they came to me sooner or later. I wanted your hair, all for myself. From all the graces my homeland offered I chose only your savage heart. ...read more.