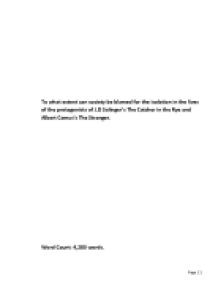 To what extent can society be blamed for the isolation in the lives of the protagonists of J.D Salingers The Catcher in the Rye and Albert Camuss The Stranger.

﻿To what extent can society be blamed for the isolation in the lives of the protagonists of J.D Salinger?s The Catcher in the Rye and Albert Camus?s The Stranger. Word Count: 4,283 words. Abstract People who dare to make a unique stand, people who don?t fit into the social rules and norms of the world, are rejected by the circle of Society. Society allows those who fit comfortably into its circle, obeys the regulations it creates and follows what everyone else in the group does. Being outside this circle made by Society is not only a challenge, it has become nearly impossible to do so all these years. As time passes by, society narrows its thoughts even more, and the space of the group descends with time, and those outside the circle, are the ones who remain isolated. In J.D Salinger?s The Catcher in the Rye and Albert Camus? The Stranger, the protagonists, Holden and Mersault chose not to follow what society had destined for them, and followed their own route. When this route betrays them, and society pushes them into further isolation and despair, they realize the importance of being accepted in the circle of society. I would like to explore as to what extent society can really be blamed for isolating these characters, and whether it is society?s fault or the individual who suffers in adjusting with the way the world works, and to reflect upon the conflict between the individual and society. Contents Introduction_______________________________________Page 4 The Protagonist?s Individual Isolation___________________Page 6 Society?s Relationship with the Protagonists______________Page 7 Symbols and Metaphors to portray Isolation______________Page 10 Conclusion__________________________________________Page 12 Introduction Isolation is the state of being alone and not being surrounded by anybody. In a world consisting of six billion human beings, it is impossible for someone to spend their life devoid of people around them. Someone could be sitting all alone in an empty room, and yet not enjoy loneliness and isolation, and there could be someone struggling with millions of people around him, and yet could suffer an isolated life. ...read more.

I told her it didn?t mean anything but that I didn?t think so.? Love and companionship is what acts as removal of solitude in someone?s life, and most of the times, the isolated seek true love and concern, and seek someone who stand by them through the tribulations and emotional turbulence. But Mersault doesn?t seek anything. It could be that he knows that Marie doesn?t mean what she says, and blindly believing her would be a mistake, in turn hurting him more, and isolating him even further. Despite that, he continues to be physically intimate with Marie and kisses her, which could mean that he believes in what he says and believes in speaking nothing but the truth. This incident also acts as evidence to the fact that despite getting lured by beauty and sex, he still does not lie to her that he loves her. He never changes his expression or opinion to settle into social expectations. Albert Camus also claims that ?In our society any man who doesn?t cry at his mother?s funeral is liable to be condemned to death? and that ?Mersault doesn?t play the game, the game being: he refuses to lie. We all lie, to make life simpler and he refuses to hide his feelings and society immediately feels threatened? After murdering the Arab at the beach house and being arrested for it, he is taken to the lawyer for interrogation. The Magistrate wonders whether he loves his mother or not, and he replies saying that he loves her as much as he loves anyone else, and states that ?All normal people at one time wished their loved ones were dead?. The lawyer asks him not to state any of this at the court in the Magistrate?s presence, and Mersault refuses to contradict the truth in front of the court. To adjust to the beliefs of society and law, the innocent and the criminals are made to make false statements, which in turn, destroy the situation even further. ...read more.

His innermost desire is to escape the absurdity and the corruption that society possesses and sneak into the paranormal world of fantasy. To be a catcher in the rye is symbolic of when little innocent children play in the rye, without the prying eyes of society and without the knowledge of the world ahead of them, and the task of the catcher is to stop them from falling and hurting themselves, which is metaphoric of how Holden would catch the children from losing their innocence, hurting themselves and gradually turning into phony adults. He yearns that he could just catch them all day, immersing himself in their laughter, their tears and their innocence, and clean the world from its maturity. The dream is certainly extreme in its thinking, and the reader could sense the instability that Caulfield is experiencing to experience such thoughts. Conclusion I would like to infer that the conflict between an individual and society has been taking place for many years. Many of them become martyrs and live life without any pattern or without conforming to the narrow minded rules of the world. It is difficult to assume as to who is victorious in the end, whether it is society or the protagonists. It is also a battle between absolute truth and society?s tinted statements. Society will isolate those who do not conform its rules, and if the isolated are strong enough, they could live life their own way, and die as martyrs, but as Albert Camus comments about Mersault, he calls him not a reject, but a ?poor and naked man, in love with a sun which leaves no shadows? and someone ?without any heroic pretensions, agrees to die for the truth?, whereas Holden spends his life clinging and lingering onto the notion that basic yet the most beautiful values of life like love, kindness and innocence are the key to a fulfilling and satisfying life, we do not know whether he succeeds in proving that to society and the world around him, as he quietly goes back home, instead of leaving his home. ...read more.