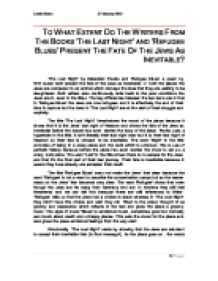 To What Extent Do The Writers From The Books 'The Last Night' and 'Refugee Blues' Present The Fate Of The Jews As Inevitable?

TO WHAT EXTENT DO THE WRITERS FROM THE BOOKS 'THE LAST NIGHT' AND 'REFUGEE BLUES' PRESENT THE FATE OF THE JEWS AS INEVITABLE? 'The Last Night' by Sebastian Faulks and 'Refugee Blues' a poem by W.H.Auden both present the fate of the Jews as inevitable. In both the pieces the Jews are compared to an animal which conveys the idea that they are waiting to be slaughtered. Both writers also continuously refer back to the poor conditions the Jews are in, even in the titles. The key differences between the two texts are in that in 'Refugee Blues' the Jews are now refugees and it is effectively the end of their time in capture but the Jews in 'The Last Night' are at the start of their struggle and captivity. The title 'The Last Night' foreshadows the mood of the piece because it shows that it is the Jews' last night of freedom and shows the fate of the Jews as inevitable before the reader has even started the body of the piece. Faulks uses a hyperbole in the title; it isn't literally their last night ever but it is their last night of freedom so their fate is showed to be inevitable. The word 'Night' in the title connotes of being in a scary place and the dark which is unknown, this is use of pathetic fallacy because before the piece has even started the mood is set as a scary, dark place. ...read more.

It is usually used after a statement so that the reader thinks about it: "a sound came to them from below". Sebastian Faulks writes rhetorical questions to make the reader feel sorrow for the Jews. It also involves the reader in the text: "why did she stare as though she hated him?" W.H.Auden uses structure to present the fate of the Jews as inevitable. The piece is structured in a way that in every stanza a scene is displayed, the scenes portrayed tell a story of how the Jews are being kicked out of society. At the start of the piece the Jews are shown as just living their normal lives, whereas the last stanza shows the Jews 'on a great plane' which implies they are in the middle of nowhere and have been completely kicked out of society. The first line of every stanza makes a statement, "Say is city had ten million souls", the second line simply expands on the first point and in most of the stanzas it mocks the Jews in a discrete way. For example: "some are living in mansions, some are living in holes". The third line then mentions something about what was wrote in the second line and then "oh dear" is in the middle. ...read more.

The women are "wailing" names and the word wailing connotes an unpleasant, loud sound which may also relate to the wailing walls of Jerusalem after the Jews defeated the Romans, this would then be shown as the present problem of the Nazis and that they will defeat them. In 'Refugee Blues' and 'The Last Night' there is an extended metaphor; it relates the Jews to animals but in 'Refugee Blues' the Jews are shown as worse than animals: "poodle in a jacket". This shows even the German dogs have warm clothes and they are still cold, whereas in 'The Last Night' the Jews are shown as animals and the purpose of animals is to be eventually slaughtered; this shows the Jews have been born to be slaughtered. The writer states, "a shower of food was thrown towards them", which makes the reader think of feeding time at the zoo which again relates the Jews to animals. The writer in 'Refugee Blues' uses rhetorical questions to make you feel involved in the text and makes the reader think specifically about what is asked and therefore the writer can control what the reader is thinking about at certain times in the piece. Similarly the writer can have control over the reader's feelings. The fate of the Jews is shown as inevitable in both 'The Last Night' and 'Refugee Blues' through the title, structure and language used. ?? ?? ?? ?? Lewis Green 3 February 2012 1 | Page ...read more.