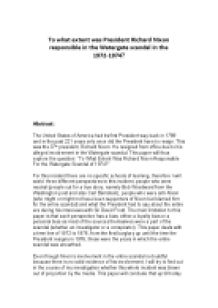 To what extent was President Richard Nixon responsible in the Watergate scandal in 1972-1974?

﻿To what extent was President Richard Nixon responsible in the Watergate scandal in the 1972-1974? Abstract: The United States of America had its first President way back in 1789 and in the past 221 years only once did the President have to resign. This was the 37th president, Richard Nixon. He resigned from office due to his alleged involvement in the Watergate scandal. This paper will thus explore the question: ?To What Extent Was Richard Nixon Responsible For the Watergate Scandal of 1974?? For this incident there are no specific schools of learning, therefore I will wield three different perspectives to this incident, people who were neutral (people out for a true story, namely Bob Woodward from the Washington post and also Carl Bernstein), people who were anti-Nixon (who might or might not have been supporters of Nixon but blamed him for the entire scandal) and what the President had to say about the entire era during his interviews with Sir David Frost. The main limitation to this paper is that each perspective has a bias; either a loyalty bias or a personal bias as most of the sources themselves were a part of the scandal (whether an investigator or a conspirator). This paper deals with a time line of 1972 to 1976, from the first burglary up until the time the President resigns in 1976, these were the years in which the entire scandal was unearthed. Even though Nixon?s involvement in the entire scandal is doubtful because there is no solid evidence of his involvement, I will try to find out in the course of my investigation whether this whole incident was blown out of proportion by the media. This paper will conclude that up till today even though nobody was able to convict Nixon for his involvement in the Watergate Scandal, he was however involved in a cover-up, an act to obstruct justice. ...read more.

Nixon?s involvement in the cover up of the Watergate scandal was highly disputed up until March the 21st. There is no doubt that on the 21st of march John Dean(The White House Counsel) accosted him and laid down key elements of the ?cover-up?, these key elements included a history of the break in and also criminal liabilities of top presidential aides like Haldeman and Alecman and also Dean himself. Nixon was told that 100?s of thousands of dollars had been paid to keep the Watergate burglars silent through the January trials, but he refuses knowledge of hush money being paid. 2 days before the trials, Hunt demanded 120,000 for continued silence. A total of 1 million US Dollars were paid as blackmail money. According to the Ex-President after the resignation of Haldeman and Alecman[9] he worked to get the truth out but his critics think otherwise and believe that he continued his involvement in the cover up.?If the President does it, that means it?s not illegal?[10] Richard Nixon spoke these insolent words during the interviews, Historians - critics like Fred Emery, Stanley Kutler, James Preston and others - have widely criticized him for his choice of words. The Ex-President argued that in the area of criminal activity the President is immune; that he can use the government resources for personal benefit. James Preston, the chief researcher for David Frost revealed in his book that according to the President he could bend government agencies for his political purposes, to such an extent that he could risk National Security[11]. To add to the conviction of historians regarding Nixon?s complicity, when Frost questioned him about his statement he said that when these actions were exposed, as President he could call them mistakes. When the topic of impeachment came up during the interview, Nixon spoke in his defense averring that technically he did not commit a crime or a culpable offense. ...read more.

Many people believed that Nixon?s resignation was an indirect confession to his involvement in the scandal, but John Herbers a news reporter who wrote an article about Nixon?s life thinks otherwise. For Nixon politics was a game, a game in which he had to win no matter the cost. Then, for which politician is politics not a game? Gaining political accreditation was a game; once Nixon started he couldn't stop even when he reached the top. The Watergate Scandal was an example of this because he infused this ?win under all circumstances? attitude into all the people in his administration. Being the President he could have controlled the flow of information to the media, but he didn?t, this establishes that he had nothing to conceal. His motive for involvement was to protect his administration, which consisted of his close friends. The question thus arises how can the President put his personal life before his Nation? As stated Nixon?s involvement cannot be entirely proved due to the inconsistencies in the evidence, but from evaluation and the analysis of all the sources it has been concluded that Nixon was involved in the Watergate scandal only after the second break-in. He can be held responsible and blamed for not having a holistic judgment of the issue and failing to bring those involved to justice, but the occurrence of the break-in, bugging and perjury is all to be blamed on the people in his committee to re elect and other officials. What did the president know and when? These are the questions commonly asked. If it could have been proven that Nixon was a victim of over-enthusiastic supporters, then Nixon?s presidency could have survived. When Nixon learned of the break-in is a very fundamental part of understanding the role he played in the subsequent cover-up. Till that point is determined one cannot make out the exact extent of his involvement. On the basis of the close study of the evidence found so far, President Nixon?s biggest shortcoming as President was his dishonesty to the American public during the investigation of the burglary. ...read more.