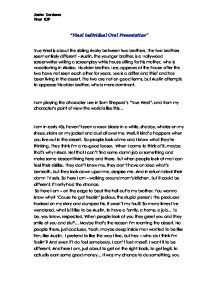 "Final Individual Oral Presentation" True West is about the sibling rivalry between two brothers. The two brothers seem entirely different - Austin, the younger brother, is a Hollywood screenwriter writing a screenplay while house sitting for his mother, who is vacationing in Alaska. His older brother, Lee, appears at the house after the two have not seen each other for years. Lee is a drifter and thief and has been living in the desert. The two are not on good terms, but Austin attempts to appease his older brother, who is more dominant. I am playing the character Lee in Sam Shepard's "True West", and from my character's point of view the world is like this... I am in early 40s, haven't seen a razor blade in a while, shabby, wholes on my shoes, stains on my jacket and dust all over me. Well, it kind'a happens when you live out in the desert. So people look at me and I know what they're thinking. They think I'm a no-good looser. When I come to think of it, maybe that's why I steal. Not that I can't find some damn job or something and make some descent living here and there. But when people look at me I can feel their dislike. They don't know me, they don't have an idea what's beneath, but they look down upon me, despise me. ...read more.

then when I come to think of it, I don't really want her to see me like that. So maybe it's better that way. And this Saul Kipper... or Kimmer...whatever. He just popped up in the whole picture just some days ago. He seems like a nice guy. We played golf and stuff. One of those Hollywood guys. But anyway, I'm not falling for all that. He may seem like your best friend, but all he chases is his own interests. These people usually make you feel confident, make you feel important, like you know, the talented screenwriter, the bright future, the top of the world... And then they suck you dry, chuck you and go for the next loot. That's how they make their living. So I'm playing the na�ve inexperienced guy with the hot story everybody wants so bad, but underneath I'm wide awake. Damn, this whole Hollywood shit, it's not for me. I don't really fit into this. I just wanna finish this, get my money and disappear. But who knows, maybe when I smell the big money, maybe then I'll feel different about it and I'll decide to stay. I think that's what scares my brother Austin so much. And the problems... where to start from? I can't even formulate the problems in my life one by one. It's like my life itself is a problem. I am a problem. ...read more.

So does Austin, but that's another issue. There is an opportunity, a huge opportunity, and for both of them to work together and earn lots of money . All they have to do is sit down, talk it over, and work together. But instead settling their issues, the two act like children. Neither of them is willing to say he's sorry, neither of them is willing to settle down his pride a little bit... From my point of view it's not so hard to leave the differences behind and try to do on, especially when you have such a promising opportunity lying ahead of you. Imagine the luck they've struck, imagine the money they'll get, the life they could have. It's a real waste! "True West" is generally about two brothers switching places. The younger brother, Austin, is the ambitious and decent Hollywood screenwriter, trying to break through, working on a very promissing script and talking over a potential deal with an important Hollywood producer. The older brother, Lee, is a thief. And the conflict in the play comes when the producer who was negotiating with Austen prefers to take on Lee's story, considered by him to be a "true western". Austin is irritated and growing furious, and his anger reflects Lee's behaviour too. The two brothers are forced to face the alternative - what it would be like to be the other one. ?? ?? ?? ?? Jashn Sardana Final IOP ...read more.