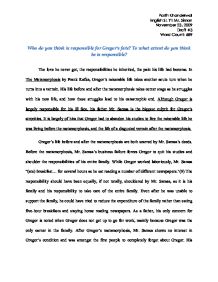 Who do you think is responsible for Gregor's fate? To what extent do you think he is responsible? The love he never got, the responsibilities he inherited, the pain his life had become. In The Metamorphosis by Frank Kafka, Gregor's miserable life takes another acute turn when he turns into a vermin. His life before and after the metamorphosis takes center stage as he struggles with his new life, and how these struggles lead to his catastrophic end. Although Gregor is largely responsible for his ill fate, his father Mr. Samsa is the biggest culprit for Gregor's atrocities. It is largely of him that Gregor had to abandon his studies to live the miserable life he was living before the metamorphosis, and the life of a disgusted vermin after the metamorphosis. ...read more.

After Gregor's metamorphosis, Mr. Samsa shows no interest in Gregor's condition and was amongst the first people to completely forget about Gregor. His indifferent attitude towards Gregor really triggers Gregor's guilt towards his responsibilities, which in the end takes his life. Gregor's scars were not just mentally, but are also physically represented by the apple at his back, from which he "he suffered for over a month" (40) with. In this scenario, Mr. Samsa is regarded by Gregor as "(it) seemed to have reminded even his father that Gregor was a member of the family, in spite of his present pathetic and repulsive shape... endure him..." (40). The pain caused by the apple, physically, does not kill him, it is his isolation from the family that causes his death. ...read more.

Even though he barely earns enough to cover up his father's debt, he wants to send her to music school. It is when his sister advises his parents to throw Gregor out of the house that Gregor's guilt overwhelms his struggle to live, and he dies within hours of that incident. Mr. Samsa lacks the qualities of a caring father, which is the central reason for Gregor's death. With enormous responsibilities at a young age, his life even before the metamorphosis is the life of a beetle. Much of this has a lot of to do with Kafka's strained relationship with his own father, who he describes as "huge, selfish, (and an) overbearing businessman," in his Letter to his father. Although this is not the reason why Kafka died, it sure is the reason why Gregor dies. ?? ?? ?? ?? Parth Khandelwal English SL Y1 Mr. Simon November 23, 2009 Draft #3 Word Count: 689 ...read more.