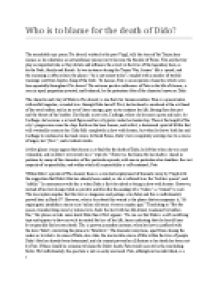 Who is to blame for the death of Dido in Virgil's Aeneid?

﻿Who is to blame for the death of Dido? ________________ The remarkable epic poem The Aeneid, written by the poet Virgil, tells the story of the Trojan hero Aeneas as he undertakes an extraordinary journey on to become the founder of Rome. Fate and destiny play an important role as they dictate and influence the events in the lives of this legendary hero, as do the Gods, family and friends. In two instances during the Trojan War, Aeneas? life is spared, and the reasoning is often echoes the phrase: ?he is not meant to die?, coupled with a number of terrible warnings sent from Jupiter, King of the Gods. To Aeneas, Fate is an auspicious character, which saves him repeatedly throughout The Aeneid. The extreme positive influences of Fate in the life of Aeneas, is seen in equal proportion inverted, and balanced, by the portentous fate of the character known as Dido. The character and story of Dido in The Aeneid, is one that stirs human emotion. Here is a queen laden with awful tragedies, revealed to us through Dido herself. First, her husband is murdered at the evil hand of her own brother, and in an act of sheer courage, goes on to continue her life, fleeing from the past and the threats of her brother. She founds a new city, Carthage, where she becomes queen and ruler. ...read more.

Although Aeneas did partake in consummating a relationship with Dido, but there was never a ceremony, never a formal proclamation of marriage. Aeneas, in a sense, is as equal a victim as Dido is with the fictitious relationship that is plotted by the immortals, except from the fact that Virgil does not depict him as being wounded by Venus as Dido is, and appears to have more of a choice in the matter. He was never made aware by Venus and Juno in of the situation that brought the two together and lured Dido into a spell of enchanted, consuming, love. Aeneas is least to blame because he did not create the situation nor did he ask for it, but it was heaped upon him by the gods, and also it seems, Fate. However, there should be some responsibility held to Aeneas for being so unmoved by the desperate pleas of Dido, especially when she says she is ?moribundam? ?about to die. We also see that her may have had the power to ease the queens suffering from Book IV, where Aeneas is described as ?lenire dolentem solando cupit et dictis auertere curas,? ? that he wishes to ?ease her sadness by comforting her and to turn aside pain with words.? However, he never acts upon this desire thereby putting himself forward for the blame of her death, because he may have been able to avert it. ...read more.

From the third dimension that Virgil adds ? Sychaeus . He is only a memory to be sure, but real enough in Dido?s mind to have an important function in the narrative. Sychaeus by his spiritual omnipresence induces in Dido the feelings of betrayal and guilt to which she succumbs by suicide when Aeneas? departure removes all her hopes of any semblance of honour through marriage. Suicide is a choice that can only be made by the individual. Dido makes this choice on her own, by herself. Therefore, ultimately she is the one who can claim the most responsibility for her fateful action. It would appear therefore, that there are several factors which contribute to Dido?s end; the gods, fate, Aeneas, and her own actions. Dido is a victim of fate, and her fate had a tragic end foretold for her. Possibly the least responsible is Aeneas himself, for he is placed in his position by external and more powerful forces. Anna, although her actions are not intended to cause harm, influences Dido the most, allowing Dido to feel more confident with pursing a relationship with Aeneas. It is also Anna?s pyre that provides the setting for Dido?s suicide. The immortals also share the blame; both Venus and Juno create the illusion of love for Dido, and cause her to fall in love with Aeneas. So, who is to blame for the death of Dido? Perhaps the most likely character is Dido herself. She as an individual commits the act and commits herself to the Underworld. No one else could have done that for her. ...read more.