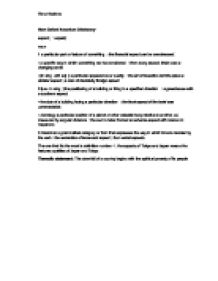 New Oxford American Dictionary aspect |'aspekt| noun 1 a particular part or feature of something : the financial aspect can be overstressed. � a specific way in which something can be considered : from every aspect, theirs was a changing world. � [in sing. with adj. ] a particular appearance or quality : the air of desertion lent the place a sinister aspect | a man of decidedly foreign aspect. 2 [usu. in sing. ] the positioning of a building or thing in a specified direction : a greenhouse with a southern aspect. � the side of a building facing a particular direction : the front aspect of the hotel was unremarkable. � Astrology a particular position of a planet or other celestial body relative to another, as measured by angular distance : the sun in Aries formed an adverse aspect with Uranus in Capricorn. 3 Grammar a grammatical category or form that expresses the way in which time is denoted by the verb : the semantics of tense and aspect | four verbal aspects. The one that fits the most is definition number 1, the aspects of Tokyo and Japan means the features qualities of Japan and Tokyo. Thematic statement: The downfall of a country begins with the spiritual poverty of its people. Quote Analysis "Gaston was in fact walking through the rain along a back street of the town. Occasionally the strains of a popular song, from the radio of one of the houses he passed, reached his ears, but otherwise everything was still- very few of the houses had tiled roofs. Instead, the roofs were made of zinc sheeting, or else stones had been fitted together in the ancient style. Here you could see the dark poverty of the Tohoku area. But even these little houses, so primitively built, had, unlike the houses of Tokyo, each its little garden. The green leaves of the trees were wet with rain and reflected whatever light still reached them. ...read more.

He describes this group of people as a "breed", comparing them to animals, which implies that the Japanese who are devoted to foreign culture are frowned upon in Japan and their actions are considered animal-like and abnormal to the local traditions. The mocking tone persists when the narrator describes them as "flocking" birds that wear "berets on their head", "have French books tucked under their arms" and "sigh over French chansons". It creates a impression that the Japanese are very isolated people, who know little about foreign cultures and echoes Gaston's situation. Gaston is in similar circumstances and is little acquainted with the Japanese culture and often ends up in awkward situations and gets laughed at by the local people. A good example is the incident with the fundoshi, which he mistakes for the Japanese napkin. The author hints the reader of the uncouthness of the place by mentioning Takoamori feeling ill at ease. Quote Analysis "The old man continued to talk in a low voice, but Gaston was no longer listening He was completely taken up with the sights around him - the colorfully lit shops on both sides of the street, the glaring neon facades of the cinemas, the beautiful wares on display in the shop windows, and the mob of people milling around him. From the mouth of Shibuya station issued a massive wave of people, returning home after the day's work. They were sucked into the flowing stream on the street, to be succeeded by yet another wave. In Paris, in Singapore, in Hong-Kong, as here in Tokyo, there lived an uncountable number of people... living with no other purpose but to hang on to" (Pg. 99, Ch. 5) a) The author is portraying the Gaston awing to the daily life of Tokyo while walking with Chotei to his workplace. b) The author uses the opportunity to describe Tokyo, to hint the reader on the true cause of Gaston's arrival. ...read more.

The society became a work-power culture, working endlessly and keeping to a tight schedule: "From the mouth of Shibuya station issued a massive wave of people, returning home after the day's work. They were sucked into the flowing stream on the street, to be succeeded by yet another wave." Japan has developed a booming western-style economy with banks, where Tomoe and Takamori work and the stocks, which Tomoe trades, are just few of the examples of its westernization. The issue is however not directly addressed, which it difficult to understand. Since I am completely foreign, at first I thought that the western aspects were normal to Japan until I understood the issue which affected the Japanese; even though they have prepared materialistically, they remain stagnant spiritually and are losing their traditional culture. Easier A cultural aspect, which I had difficulties in understanding, was prostitution of Japan. To a westerner, it may seem wrong and sinful, especially if he is Christian. Prostitution is prohibited in many developed countries and became illegal in Japan after the war as a result of westernization. But little did I know that prostitution was actually legal in Japan and their culture had nothing against it. That is why it is so often mentioned in the book, for example in chapter 6 it the narrator describes "dozens of women standing in the dark alleys between the inns. Since the passing of the anti-prostitution law there is probably no other place in Tokyo where so many women can be seen lining the streets ready for business." Since Tokyo is a really western city, it is contently controlled for prostitution and if prostitution is illegal, how come it still exists in this part of Tokyo? Then I understood the true cultural context behind the Japanese prostitution. Revised Thematic Statement: The spiritual downfall of a country often begins with the loss of traditional values and increasing materialism dependency. Thesis statement: In the novel "Wonderful Fool" by Shusaku Endo, westernization has so greatly affected the Japanese traditional culture, that the change is almost invisible to the European eye. ?? ?? ?? ?? Timur Karimov ...read more.