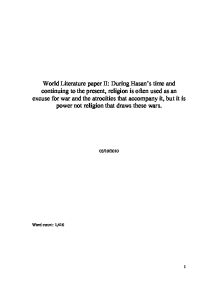 Led by Tumanbay, the Royal Advisor of the Sultan of Cairo, the Cairenes, people of Cairo, had a strong defense against the Ottoman soldiers until the death of Tumanbay after a betrayal from an ally. However, different from the Castilian conquest of Spain, the Ottoman Turks and the inhabitants of Egypt were the same religion, but different ethnic groups in both armies. Seeing the inhabitants of Cairo threatening the rule of the Ottoman Turks, "the Circassians were the first victims. Mamelukes or descendants of the Mamelukes, they were hunted down relentlessly..." From this excerpt proves Maalouf's idea of using religion as an excuse the actions and genocide committed by the Ottoman Turks. The Circassians are a different ethnic group with its own histories, people, and culture and the Ottoman Turks saw that as a threat to their rule. The Ottoman "soldiers forced open the doors of houses, and under the pretext of flushing at escaping Mamelukes, gave themselves over to pillage and rape..." Believing themselves to chase out Mamelukes out of the houses in Cairo, the soldiers committed rape and murder over the citizens of Cairo. Believing their religion justifies their actions, the Ottoman Turks are able to kill and rape the citizens of Cairo. Although the Ottoman Turks and the citizens of Cairo share a common religion, in this case, Islam, the differences of culture and ethnicity is what triggered the fire of the conflict. ...read more.

worshipped the cursed Satan, that the old manuscripts from the libraries fed huge bonfires, around which drunken soldiers danced, that no sanctuary, no palace, no house, escaped being looted, that eight thousand citizens perished, mostly from among the poor, while the rich were held hostage until their ransom was paid?" In this excerpt, Hasan describes how the Lansquenets destroyed most of Rome in order for them to gain their independence from the Papacy and the Catholic Church. It seems that the Lansquenets use their religion as an excuse to get rid of the church's power and establish their own power in Europe. Although people commit atrocities to other people in the name of their religion, it is only a power struggle that lies beneath religion. During Hasan's time, for example, the Castilians use their religion to eradicate the other religions in Spain, to make it a unified kingdom without the Muslims or Jews to threaten their rule. The Ottoman Turks use religion to kill off the native populace in Cairo so the Ottoman Turks are able to rule without the threat of other ethnic groups. The Lansquenets use religion to separate themselves from another power, in this case, the Catholic Church, and to establish their own power in Europe. In Leo Africanus, it is evident that people have committed appalling crimes in the name of religion, but its desire for power, not religion, that causes conflict with the other people in Hasan's time. ...read more.