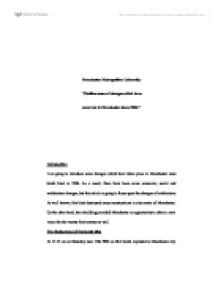 Outline some of changes which have occurred in Manchester since 1996.

Manchester Metropolitan University "Outline some of changes which have occurred in Manchester since 1996." Introduction I am going to introduce some changes which have taken place in Manchester since bomb blast in 1996. As a result, there have been some economic, social and architecture changes, but this article is going to focus upon the changes of architecture. As well known, this blast destroyed many constructions in city centre of Manchester. On the other hand, the rebuilding provided Manchester an opportunity to obtain a new vision for the twenty-first century as well. The Background of the bomb sites At 11.15 am on Saturday June 15th 1996 an IRA bomb exploded in Manchester city centre. The 3,300 lb IRA bomb situated in a white van at the junction of Cross Street and Corporation Street and Market Street, brought damage to people, businesses and the built environment. An initial survey showed that some 1,200 buildings had been damaged, over an area over 1.2 million m2. Some 49,000 m2of retail space and 57,000 m2 of office space had to been taken out of use and would have to be rebuilt. ...read more.

Spencer has four floors and includes a customer lounge where shoppers can put up their feet, watch television and read a newspaper. That is an absolutely nice place for people to have a rest. It is the biggest Marks and Spencer in the world. Close by is the Royal Exchange which reopened in 1998 after more than �30m of rebuilding. Every visitor to the city is amazed by their surroundings. "�100m new look for Arndale" The Arndale is the biggest city centre shopping mall in Britain. Arndale North has been dogged for years. The first-phase mall at the Arndale opened in September 1976, with 60 shops. The Knightsbridge Mall opened the following May. 'After almost a quarter of a century Mancunians have learned to live with - if never quite to love - the ''yellow-tiled monstrosity'' featuring ''the longest lavatory wall in Europe.''' There were 15-acre complex of more than 200 shops in Arndale centre. Retailing and its indoor malls were extremely popular in Manchester. More than 750,000 people per week visit the centre. It is firmly in the UK top 10 shopping destinations. ...read more.

Other Changes There are also some other changes in city center. First of all, Corporation Street was reserved for pedestrians and buses only, and a special 'bus loop' was created around the centre. In addition, Cannon street will be turned into a covered Winter Garden creating a new shopping street to replace the bus station Finally, a Trocadero is planned for Maxwell House, with a cinema and games complex. A cultural centre with a library and theatre will be constructed on the site of the existing NCP car park. Conclusion To summarize, architecture has not only being devastated but also being developed through Manchester bombing. That is, shopping mall, garden, the pedestrianised routes and streets are more attractive than before. Some fantastic building which was remodelled is really bringing a new scene to human beings. It does not have any words can express that, wonderful article excelling nature. In one word, the bomb blast really brought a new, fantastic city centre to Manchester. Tony Blair, the Labour leader, said: "If the IRA think they can shift the resolve of any government with this action they are cruelly mistaken."5 In my opinion, it is meaningless of bombing, Nowadays, Manchester, that the city centre had been rebuilt, is still a charming city. ...read more.