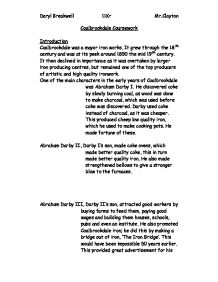 Coalbrookdale Coursework Introduction Coalbrookdale was a mayor iron works. It grew through the 18th century and was at its peek around 1850 the mid 19th century. It then declined in importance as it was overtaken by larger iron producing centres, but remained one of the top producers of artistic and high quality ironwork. One of the main characters in the early years of Coalbrookdale was Abraham Darby I. He discovered coke by slowly burning coal, as wood was done to make charcoal, which was used before coke was discovered. Darby used coke instead of charcoal, as it was cheaper. This produced cheep low quality iron, which he used to make cooking pots. He made fortune of these. Abraham Darby II, Darby I's son, made coke ovens, which made better quality coke, this in turn made better quality iron. He also made strengthened bellows to give a stronger blow to the furnaces. Abraham Darby III, Darby II's son, attracted good workers by buying farms to feed them, paying good wages and building them houses, schools, pubs and even an institute. He also promoted Coalbrookdale iron; he did this by making a bridge out of iron, 'The Iron Bridge'. This would have been impossible 50 years earlier. This provided great advertisement for his company and his iron was soon in huge demand. Although the Darby's discoveries were extremely important in the mass production of cast iron, they did not discover how to mass-produce wrought iron. The current process was done in forges, by heating and hammering the cast iron repeatedly to remove impurities. This was slow and expensive though. Then along came Henry Court who had discovered a better and cheaper method to mass produce wrought iron. His new method was as follows. He had constructed a special furnace called a reverberatary furnace. In this furnace the iron was kept separate from the fuel with a blocking bar. ...read more.

The physical evidence for the smith's and joiners shops is not very good: there are only two walls remaining, and we know it was two storey because of the joist holes in the wall and viaduct. The documentary evidence for the smith's and joiners shops are only the 1827 map and the 1801 description which says: 'Here we enter a great pile of building consisting of...Smiths Shops...' which gives some support but does not accurately tell us where they were. The physical evidence only tells us the size of the building and the height. It does not tell us the amount of workers that worked there or the pay. The documentary evidence only tells us the position. It does not tell us the height of the building or the conditions. Overall, the evidence for both the smiths shops and the joiners shop is very poor as there is not much physical evidence and not much documentary either. For this area overall I think that the documentary evidence is the most useful, even though the physical evidence is very good, the documentary evidence is more useful as it tells us facts about the buildings and tells us about the building which have no physical evidence any more, if it was not for the documentary evidence we would not know about them. The Upper Forge The upper forge changed cast iron into wrought iron, they did a process called puddling and rolling it or balling and drawing. There used to be two forges, but only on is remaining now. The foundations of this are buried under the car park next to the remaining forge. We know this because it is indicated on the 1827 map, also in the 1801 description in mentions "forges" suggesting that there was more than one. There is the upper forge pool which is nearby that powered the upper forges, we know this because it is supported by the 1827 map and it is mentioned in the 1801 description 'a beautiful sheet of water strikes our view being a reservoir for the forges just left & is called the upper forge pool.' ...read more.

The company filled in some of the pools and started to not take care of them. This was because they did not need them any more. As the building they powered was not being used any more. They also demolished some of the houses for example Smokey Row, as there were no workers living in them, as they were made redundant as they were not needed for jobs any more. The company also took up the plate ways, as they were not needed any more. Once the company had got rid of all of their other works, they were left with the Lower Works, so this has been converted into the modern works. In 1720, Coalbrookdale had a high proportion of the UK's output; this was due to Shropshire having wood, iron ore and waterpower readily available. In 1806 there was a huge rise in production at Coalbrookdale; this shows the importance of the Darby's discoveries and that it was taken up quickly in the 1770's and 80's. In 1854, Shropshire's share of national output was much less. Many more ironworks existed, for example: in the Black Country, south Wales and Scotland. Although according to Raistrick, in 1850 Coalbrookdale was the largest works in Britain-and probably the world, with and output of 2,000 tones per week. By 1894, Coalbrookdale was in decline. Although it remained important in producing high, quality and artistic iron goods and engines. Conclusion Coalbrookdale can claim to be the birthplace of the industrial revolution, because the discoveries made their meant they could make iron cheaply, which enabled them to mass-produce it, which made the industrial revolution possible. This is because they could build things like ships, bridges, railways, machines, weapons etc. These inventions lead to Britain to being able to increase trade and build up an empire that covered a quarter of the world land surface area. It included countries such as, Australia, India, Canada and parts of Africa. This lead to Britain being the number one country in the world at the time. None of this could have happened without Coalbrookdale. Daryl Breakwell 11Kr Mr.Clayton ...read more.