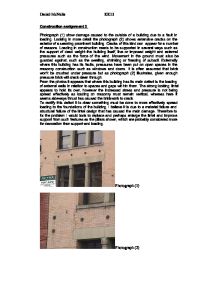 Construction assignment 2. - Photograph (1) show damage caused to the outside of a building due to a fault in loading.

Construction assignment 2. Photograph (1) show damage caused to the outside of a building due to a fault in loading. Looking in more detail the photograph (2) shows extensive cracks on the exterior of a seeming prominent building. Cracks of this kind can appear for a number of reasons. Loading in construction needs to be supported in several ways such as the support of dead weight-the building itself, live or imposed weight and external pressures such as the force of the wind. Movement in the ground must also be guarded against, such as the swelling, shrinking or freezing of subsoil. Externally where this building has its faults, pressures have been put on open spaces in the masonry construction such as windows and doors. ...read more.

To rectify this defect it is clear something must be done to more effectively spread loading to the foundations of the building. I believe it is due to a material failure and structural failure of the lintel design that has caused the main damage. Therefore to fix the problem I would look to replace and perhaps enlarge the lintel and improve support from such features as the pillars shown, which are probably considered more for decoration than support and loading. Photograph (1) Photograph (2) Dealing with moisture and the very changeable climate of the UK is a demanding requirement of architectural design and construction. In the UK we design buildings to deal with 75mm of precipitation per hour; however this is not always successful. ...read more.

The problem here results from a lack of proper flashings or coping, which is designed to guard the joints on a building where the structure is weakened to moisture attack. For example; the join between the roof and walls. Photo (3) shows this penetration may have been present for some time as the building is also under some kind of fungal attack and ill equip to deal with capillary action or air pressure. To rectify this problem and relieve the defect a greater defence of flashings and coping is needed to guard the vulnerable points of the building such as joints. The formation of some overhang device on the roof would avoid drips of water falling onto the walls surface vertically. Lamination or protection of the walls from lateral precipitation would also help relieve pressure from moisture attack. Photograph (3) Photograph (4) Daniel McNelis KK13 ...read more.