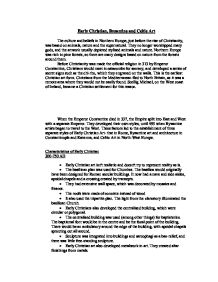 Early Christian, Byzantine and Celtic Art The culture and beliefs in Northern Europe, just before the rise of Christianity, was based on animals, nature and the supernatural. They no longer worshipped many gods, and the artwork usually depicted stylised animals and nature. Northern Europe was rich in pine forests, so there are many designs based on nature from the forests around them. Before Christianity was made the official religion in 313 by Emperor Constantine, Christians would meet in catacombs for secrecy, and developed a series of secret signs such as the chi-rho, which they engraved on the walls. This is the earliest Christian art form. Christians from the Mediterranean fled to North Britain, as it was a remote area where they would not be easily found. Scellig Michael, on the West coast of Ireland, became a Christian settlement for this reason. When the Emperor Constantine died in 337, the Empire split into East and West with a separate Emperor. They developed their own styles, until 493 when Byzantine artists began to travel to the West. These factors led to the establishment of three separate styles of Early Christian Art- that in Rome, Byzantine art and architecture in Constantinople and Ravenna, and Celtic Art in North-West Europe. ...read more.

In others, scenes of the life of Christ or more ceremonious compositions were created, showing Christ enthroned with his disciples. This combines the two, with a chi-rho sign in the centre, and didatic scenes around it showing scenes from the life of Christ. Mosaic and Painting * Baptistery of the Arians * Saint Apollinaire Nuovo The nave is highly decorated with mosaics. Characteristics of Byzantine Most work was produced in Constantinople, but the works were destroyed during the iconoclastic movement. Now the majority of work survives in Salonica, Nicaea, and Daphni in Greece and Ravenna in Italy. It spread throughout the Mediterranean, although the most important was Ravenna. This is where most of the work was preserved and can be found now. The style developed in the Eastern Empire. It originally focused more on icons and depictions of religious figures than the Western Empire, although the iconoclast movement later changed this as it forbade the depiction of these figures. Earlier Byzantine art and architecture had it's own characteristics. * Like Early Christian, the Churches were made from the basilican plan or the central plan. The centralised plan was however more common. * The centralised plan always had a domed ceiling. To create a join between the building and the roof, pendentives were used in the corners of the building. ...read more.

Although it was not built during the Byzantine period, it reflects the characteristics because of its domes and rounded arches. Celtic Characteristics * Decorative instead of realistic * Used flowing patterns and continuous lines based on nature * Roots are in Ireland * The first style to use the cross as part of Christian art. Other Churches did not use the cross as a symbol because they were trying to convert people, and therefore only illustrated the appealing aspects of the religion. The cross was a symbol of death. However in Ireland they introduced the crucifix in art as the population was entirely Christian already. Examples * The LindisFarme Gospel, written and illustrated c. 698 by the Bishop of LindisFarme in Northumbria. It shows an attempt to reintroduce realism into art. A mixture of many styles, mainly Christian Irish art. * Animal head from the Oseberg burial c 825 A wooden carving of an animals head, 5 inches high. Celtic art centres on nature and animals. It shows curvilinear forms and fluid, abstracted designs. * Bewcastle cross. Late 7th Century. The interlace pattern is said to chase away evil spirits. The designs can actually be traced in a single line interweaving and crossing over itself. * The Book of Kells early 9th Century This was decorated by the monks of the Iona community. Each decorated letter marks the start of one of the four gospels. It is typical of Celtic Art. ...read more.