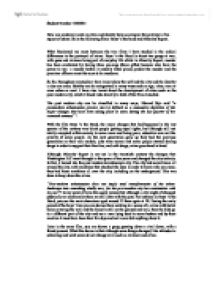 How can academic work on cities and identity help us compare the portrayal of an aspect of urban life in the following films: Boys 'n the hood and Minority Report.

How can academic work on cities and identity help us compare the portrayal of an aspect of urban life in the following films: Boys 'n the hood and Minority Report. What fascinated me most between the two films I have studied is the radical differences in the portrayal of crime. Boys 'n the Hood is about two gangs at war, with guns and violence being part of everyday life whilst in Minority Report, murder has been eradicated by having three pre-cogs (three gifted humans who have the power to see a murder before it actually takes place) predict the murder and the precrime officers arrest the soon to be murderer. So far, throughout my studies I have learnt about the self and the city and the identity a city can carry. Identity can be categorised in many ways such as age, class, race or even urban or rural. I have also learnt about the development of cities such as the post-modern city, which I found links directly to both of the films I studied. The post modern city can be classified in many ways, Edward Soja said "a postmodern urbanisation process can be defined as a summative ...read more.

"Post-modern urbanization does not imply total transformation of the urban landscape into something wholly new, for the post-modern city has continuities with its past"�. In my point of view this quote means that although a city might of changed physically or emotionally there are still links with the past. For instance in Boys 'n the Hood, you see the main characters aged around 12 then again at 18. During the early period of the boys' lives you are shown them walking to a scene of a crime with bullet holes covering the wall and the blood is still on the ground and wall, then the kids go to a different part of the city and see a man lying dead in some bushes and by their reaction it must have been their for days and not a soul did anything about it. Later in the same film, you are shown a gang gunning down a rival down, with a friend present. What this shows is that although some things changed, like attitudes to schooling and work some do not change at all such as violence and crime. ...read more.

Edward Soja also used an example like this to describe post-modern urbanization. The urban experience in Minority Report is dominated by the hyper-real, another part of the post-modern city. Throughout the entire film there are adverts that have eye scanners and direct the advert to the individual, and when the lead John Anderton played by Tom Cruise is running from the Precrime unit the newspapers change their headlines instantly to tell the readers of future crime that John Anderton will commit. So in conclusion the academic work that we have studied can help us understand the portrayal of the different aspects of urban life within cities. All aspects are can be tied together for instance crime and surveillance, work and family and so on. People tend to take films or any other sort of media interaction at face value and not truly understanding what the director wants to say within his film. Different people will view the same two films I watched differently and may disagree with what Soja may have said, but at least with the academic knowledge we posses now, we can take it all in and at least try to look at it from a different angle. ...read more.