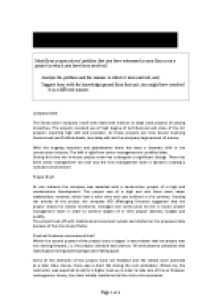 Identify an organisational problem with a project that your firm has been involved with.

﻿Identify an organisational problem that you have witnessed in your firm or on a project in which you have been involved. Analyse the problem and the manner in which it was resolved, and; Suggest how, with the knowledge gained form this unit, you might have resolved it in a different manner. Company Brief: The Construction Company I work with deals with medium to large scale projects of varying disciplines. The projects involved are of high degree of Architectural and state of the Art projects requiring high skill and precision. As these projects are time bound involving Government and Political heads, any delay will cost the company large amount of money. With the ongoing recession and globalization there has been a dramatic shift in the construction industry. The shift is right from senior management to unskilled labor. During this time the in-house project team has undergone a significant change. There has been senior management roll over and the new management team is dynamic creating a turbulent environment. Project Brief: At one instance the company was awarded with a construction project of a high end condominium development. The project was of a high end and there were major stakeholders involved, which had a strict time and cost outlined in the contract. Sensing the priority of the project the company MD (Managing Director) suggested that the project should be closely monitored, managed and constructed by the in house project management team in order to achieve targets of in time project delivery, budget and quality. ...read more.

Overall, the main organizational problem observed was that the strategy was being done like ?ON THE RUN?. It was also observed that the project manager was not adopting an organic approach as per the rate of changing situations. He was still following the stable environment approach, where by the lower level employees were obliged to comply often with reluctance. The strategy of the company was really not agreeable as per the circumstances. Managers should de-centralise authority to employees to achieve goals. ?The traditional structure is highly bureaucratic, and experience has shown that it cannot respond rapidly enough to a changing environment. Thus, the traditional structure must be replaced by project management, or other temporary management structure that are highly organic and can respond very rapidly as situations develop inside and outside the company.? (Kerzner, pg 2, tenth edition, 2009) Thus the problems observed in the organization can be categorized as; ?Employee issues: Individual problems, personality conflicts, supervisory issues or failure of organizational communication. Team problems: Lack of complete information communication, lack of effective leadership producing a poorly functioning team. Organizational problems: An imbalance between demand and supply, failure of communication or significant disconnect between company culture and front line coalface culture.? (Sutherland and Canwell 2004, cited in www.qub.ac.uk) From the above categorization, it can be analyzed that the company had in fact all the three problems. Due to the economic situation, the company had adopted strategy of multitasking to decrease the labor. ...read more.

In his ground breaking work strategy and structure (1962), Chandler stressed that a long term coordinated strategy was necessary to give a company structure, direction and focus?. (Chandler, 1962, cited in Allan and Lewis 2007). An alternate approach to resolve the problem would have been collaborative approach to problem solving. Which is to involve all the relevant stake holders, investigate the weak section in the management and carry ahead step by step and phase by phase build policy along with maintenance of risk register (this strategy was implemented by the PMC ) and design and agree a process or a problem solving plan. Application of SWOT analysis of Tarmac: The internal and external factors of an organization should be analysed because many factors represent both opportunity and threat or both strength and weakness. Most managers? advice against the idea of sticking rigidly to a business plan. It is important to have a flexible approach to business so that the company can respond to opportunity as and when it arises. (Mawhinney,2001,pg.51 &52). Another type of approach is applying, ?The CIRA type of model has a number of simple initial steps; List all the risks, access their consequences and access their likelihood and look for methods of alleviation. Listing all the risks could be a very difficult exercise?. (Mawhinney,2001,pg.59). It can be summarized that for a successful completion of a project in all respects the management team has to have a better understandability of client?s criteria when procuring for a project. It is important that all doubts and errors in documentation are identified by the contractor at the time of preparation of the tender. ...read more.