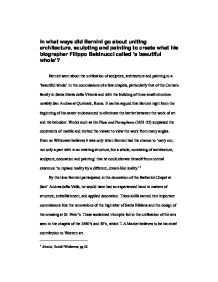 In what ways did Bernini go about uniting architecture, sculpting and painting to create what his biographer Filippo Baldnucci called &amp;#145;a beautiful whole&amp;#146;?

In what ways did Bernini go about uniting architecture, sculpting and painting to create what his biographer Filippo Baldnucci called 'a beautiful whole'? Bernini went about the unification of sculpture, architecture and painting to a 'beautiful whole' in the commissions of a few chapels, particularly that of the Cornaro family in Santa Maria della Vittoria and with the building of three small churches notably San Andrea al Quirinale, Rome. It can be argued that Bernini right from the beginning of his career endeavoured to eliminate the barrier between the work of art and the beholder. Works such as his Pluto and Persephone (1621-25) surpassed the constraints of marble and invited the viewer to view the work from many angles. Even so Wittkower believes it was only when Bernini had the chance to 'carry out, not only a part with in an existing structure, but a whole, consisting of architecture, sculpture, decoration and painting' that he could elevate himself from normal existence 'to replace reality by a different, dream-like reality.'1 By the time Bernini participated in the decoration of the Barberini Chapel at Sant' Andrea della Valle, he would have had an experienced hand in matters of structure, embellishment, and applied decoration. ...read more.

The light is reflected and carried on brass-gilded rods behind the sculpture. The culmination of the light effect creates an ethereal aura that dramatises the sculpture and at the same time separates the viewer from the supernatural event. The hidden light source is just one of the theatrical effects in which Bernini can be seen to be uniting architecture and sculpture. To examine the full use of bel composto it will be necessary to examine the Cornaro Chapel and Sant Andrea al Quirinale in their entirety as Bernini intended us to. The Cornaro Chapel is an example of Bernini's ecstatic yet contemplative use of bel composto. The main sculptural event, as mentioned earlier, is the Ecstasy of St Theresa set above the high altar in a deep niche. It is the moment of ecstasy felt by the Saint that has been attained by prayer. Bernini pulls the main entablature of the church into the chapel. The ceiling vault above the entablature is a painted illusion containing the real architecture of the church, which opens to the heavens signified by a golden light and the appearance of the Holy Spirit as a dove. ...read more.

Again we see the bel composto effectively convey narrative. The central dome is decorated with stuccoed putti, flowers, ribbons and fisherman that were St Andrew's companions. The gilt dome is richly stuccoed in gold and shines brightly under the light from the windows placed above the cornice creating a vision of 'heaven'. The figure of Andrew looks up to the Holy Spirit stuccoed in the lantern.9 The material relics of the saint symbolise the "micro cosmos", and the carved figures beneath the dome express a yearning for the "macro cosmos", for communion with God.10 Bernini is able to unite architecture, painting, and sculpture to create an entire religious experience, 'the church is a framework and in a sense the theatre of action.'11 The drama unfolds to the senses through the bel composto creating a new genre in the Baroque, an ecstatic art. Bernini broke down traditional and familiar boundaries. He used effects such as the hidden light source to dramatise the particular event sculpted. Illusionistic painting and stuccoes that overlapped the real architecture helped bring a heavenly presence to the chapels and churches of the 1640's and 50's. He fused various media as Wittkower points out 'just as the various levels of reality-psychological, chronological, and tangible melt into one'12 beautiful whole. ...read more.