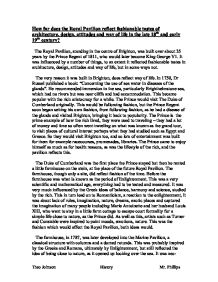 How far does the Royal Pavilion reflect fashionable tastes of architecture, design, attitudes and way of life in the late 18th and early 19th century?

The Royal Pavilion, standing in the centre of Brighton, was built over about 35 years by the Prince Regent of 1811, who would later become King George V1. It was influenced by a number of things, to an extent it reflected fashionable tastes in architecture, design, attitudes and way of life, but in some ways not.

The very reason it was built in Brighton, does reflect way of life. In 1750, Dr Russel published a book: “Concerning the use of sea water in diseases of the glands”. He recommended immersion in the sea, particularly Brighthelmstone sea, which had no rivers but was near cliffs and had accommodation. This became popular with the rich aristocracy for a while. The Prince would visit The Duke of Cumberland originally. This would be following fashion, but the Prince Regent soon began setting his own fashion, from following fashion, as he had a disease of the glands and visited Brighton, bringing it back to popularity. The Prince is  the prime example of how the rich lived, they were used to traveling – they had a lot of money and time so often went traveling on what was known as the grand tour, to visit places of cultural interest perhaps what they had studied such as Egypt and Greece. So they would visit Brighton too, and so lots of entertainment was built for them for example racecourses, promenades, libraries. The Prince came to enjoy himself as much as for health reasons, as was the lifestyle of the rich, and the pavilion reflects this.

The Duke of Cumberland was the first place the Prince stayed but then he rented a little farmhouse on the stein, at the place of the future Royal Pavilion. The farmhouse, though only a site, did reflect fashion of the time. Before the farmhouse was what is known as the period of Enlightenment. This was a very scientific and mathematical age, everything had to be tested and measured. It was very much influenced by the Greek ideas of balance, harmony and science, studied by the rich. This in turn lead on to Romanticism, a reaction to the enlightenment, It was about lack of rules, imagination, nature, dreams, exotic places and captured the imagination of many people including Marie Antoinette and her husband Louis XIII, who went to stay in a little farm cottage to escape court formality for a simple life close to nature, as the Prince did. As well as this, artists such as Turner and Constable were inspired to paint moods, emotions, nature. This was the fashion which would affect the Royal Pavilion, both ideas would.

The farmhouse, in 1787, was later developed into the Marine Pavilion, a classical structure with columns and a domed rotunda. This was probably inspired by the Greeks and Romans, ultimately by Enlightenment, but still reflected the idea of being close to nature, as it opened up looking over the sea. It was neo-classical, displaying ionic columns and tall French windows, a replica of Ancient Greek temples and buildings. This had originally been popular but there was renewed interest after things like the discovery of Pompeii. The Marine Pavilion was following this fashion, the Classical design was very much admired and evidence such as the Hotel de Salms in Paris built this way and buildings across Britain and Brighton back this up.

However in 1803, the Prince chose an Indian Moghul design for his stables. In 1815 the Prince then decided that he wanted his whole Pavilion to be built in Indian Moghul. This is significant, as by decorating only his stable, the Prince was following fashion. The Indian Moghul design itself was fashionable in a way, there was an interest in Indian and Chinese things after the East India Trading Company opened, which tied in with the Romantic feel of the times. People would visit and bring back little trinkets and ornaments, perhaps decorating a room in that style. But this was interior design and it wasn’t fashionable to have Indian Moghul architecture, nor was it fashionable to have the whole thing designed in Indian Moghul, just a section or room. This is apparent from looking at other buildings built around the time. There was only one other Indian Moghul building at the time, which was Seizincote. This can be explained by the fact that William Porden, the architect for the Pavilion stables was previously a pupil of the architect for Seizincote. They both share turquoise domes, scalloped windows, minarets and chatris (Indian style battlements). To do this, huge steel structures were needed, to provide support. To do this, the Prince took advantage of the latest technological developments, as seen in other ways too in interior design like the gas lamps. This was not immediately fashionable but the Prince began using it. So in architecture the Royal Pavilion is reflecting fashion in a way but indirectly it is setting its own fashion too.

The design of the Royal Pavilion was also just partly reflecting fashion. Chinoiserie was very fashionable in the late 18th Century but it was customary, again, to have only one room decorated in this way. In 1790 the Prince however decorated the whole of his London residence, Carlton House, in Chinoiserie style and in 1802 hired a firm to decorate the entire of the Royal Pavilion in this way, which was not fashionable at all though of course it was still influenced by the fashionable Romantic attitude.

Chinoiserie had previously been very fashionable. Chinoiserie was replica Chinese, the steel “bamboo” chair is an example of this. The prince played a part in making it fashionable once more, again he was both setting and flowing fashion. Also inside the Royal Pavilion are not Chinoiserie, there are Egyptian styled ones such as the chair made to look like a boat on the Nile. Egyptian furniture was fashionable after a recent British victory there.

The interior design of the Royal Pavilion also employs techniques such as trompe d’eoil which reflected the current romantic trend. Stairs are made out to look like the bridge from the willow pattern plate, pillars are disguised as palm tress and the ceilings are painted to look like the sky.

The Pavilion does reflect the attitudes and way of life in the late 18th and early 19th century. There are only a few rooms but the three main ones are the kitchen, the banqueting hall and the music room. We know that the prince had a hundred piece orchestra in the music room and that for meals there was a huge menu, cooked world renowned Chefs like Caramele. The rich would spend much of their time having parties, banquets and gambling when they weren’t traveling from place to place, the Prince himself only used the Pavilion temporarily. All the latest technology was used for the kitchen, to stop the smells of cooking escaping to the rest of the Pavilion, to turn the food. This all reflects that great emphasis was placed on eating, music and socializing for the aristocracy in the late 18th and 19th century. And in the Banquet room the walls are painted with important Chinese people under umbrellas, red and gold are the main colours symbolizing celebration and exclusiveness as it did in China. This alone may show that the Prince was looked up to set the fashion, at that time the Prince  would be the ultimate trend setter, though he might be influenced by ideas like Romanticism from Europe and from his upbringing he was the one who would translate it into designs like Chinoiserie to be followed by fashionable society.

This social ladder, the divide between the poor and rich too, is clear in the layout of the Pavilion. Nearby poor fishermen worked and lived, but in the servants quarters all decoration and trompe d’eoil vanishes and the rooms become plain and basic. From things like new carpets and steel, produced by machines, it is clear that the Prince took advantage of the industrial revolution, despite knowing of the terrible conditions and low pay of the workers. Comparing this to the rest of the aristocracy, it is not an unusual attitude. The pavilion features passages, hidden from view, for the servants. The aristocracy pretended to live simply and close to nature like the poor as Romanticism dictated but the reality was very different. This is described as “fashionable Romantic poverty”. It is in parallel to the design of the Pavilion, a neo-classical structure influenced by the ideas of the Enlightenment and built using the newest technology such as steel supports and gas lamps but decorated in a trompe d’eoil manner, disguising it as a Romantic building. This was the fashionable way of life, the rich did not really give up their riches and luxuries, the poor were seen as inferior and ignored, the Romantic ideas were very much dependent on the Enlightenment even if it was just as a reaction in some cases, following fashion clashed with the freedom of the Romanticism for example.

To conclude, the Royal Pavilion does reflect fashionable tastes in architecture, design, attitudes and way of life but only to a certain degree. The Royal Pavilion is a combination of fashionable ideas, the people setting the fashion would be the rich aristocracy, who would follow it too, the one looked up to in Britain was often the Prince. This is reflected in the architecture and design, the Prince often took already fashionable ideas and exaggerated or changed them, like the Indian Moghul and Chinoiserie, setting a new trend or restarting it. In architecture, he took a fashionable idea, Romanticism, and based it on a fashionable structure, neo-classical with steel supports. In this way there was often a clash of fashion, in the interior design the Nile victory coincided with the exoticism of Romanticism and the classical education of places like Greece and Egypt. The pavilion fairly accurately reflects way of life too as it showed that there were very defined classes with plain servants quarters unlike for the rich for whom relaxing, music and excess food were a way of life. But these are only the fashionable influences, the Prince changed them and came up with his own, very unfashionable building, there is not another like it in Europe. When he created fashion he was often using previously unfashionable ideas, like bringing back Chinoiserie and using the newest technology. However to get a very clear idea of whether the Pavilion reflects fashionable tastes it would be better to study other buildings built by different people especially as it only shows the Princes’ tastes and way of life, to an extent the rich but not the middle and working classes in much detail. The Royal Pavilion does reflect fashionable tastes of architecture, design, attitudes and way of life in the late 18th and 19th century but often it does not, so there is a limit to how far.