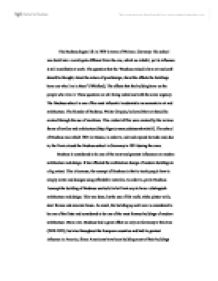 The Bauhaus school is one of the most influential modernistic movements in art and architecture. The founder of Bauhaus, Walter Gropius, believed that art should be created through the use of machines

The Bauhaus began life in 1919 in town of Weimar, Germany. The school was build into a world quite different from the one, which we inhabit, yet its influence is still manifestly at work. The question that the "Bauhaus raised is how art and craft should be thought, about the nature of good design, about the effects the buildings have one who live in them" (Whitford). The effects that the building have on the people who view it. These question are still being asked and with the same urgency. The Bauhaus school is one of the most influential modernistic movements in art and architecture. The founder of Bauhaus, Walter Gropius, believed that art should be created through the use of machines. This evident of this were created by the various forms of textiles and architecture (http://tiger.towson.edu/users/kwitts1/). The school of Bauhaus was rebuilt 1925 in Dessau, in order to, suit and expand its tasks and, due to, the Nazis closed the Bauhaus school in Germany in 1933 during the ware. Bauhaus is considered to be one of the most and greatest influences on modern architecture and design. ...read more.

The phase occurred with the stabilised economy in Germany and the nation's industry began to boom. The third phase occurred when the Bauhaus' school was forced to close in German by the Nazis. The Bauhaus was then relocated in Dessau. Where, the Bauhaus modify its teaching methods to suite the industrial's demand. Therefore, the aims of Bauhaus have been changing through the tree phases to suite the political and economical demand and changes of the world. This shows how it played a big role in reforming the taste of art and architecture in the society. Although, the Bauhaus aims have been changing throughout the three phases, but at the end the Bauhaus has made it clear to every one that it has three main aims. Firstly, the Bauhaus wanted to rescue all the arts, such as: painter, craftsmen and sculptors from isolation and combine them together in single project in which all their skills would be combined. The second aim was to raise the status of the crafts to that of the artist. Therefore, Bauhaus aimed to eliminate the class-distinctions between the artist and the craftsman. ...read more.

The teachers of the Bauhaus came to some of the most prestigious schools in the united states, to develop and spread the teaching of Bauhaus, as well as, to develop their own ideas in a freer thinking society (http://tiger.towson.edu/users/adietz1). The effect of Bauhaus in the United States is very obvious up until now, as the Bauhaus is reflected by the different popular buildings, such as Segram building, the global furniture company Ikea markets. The Bauhaus have not only effected countries, but also affected other types of arts. For example, it made many other important, which was viewed as less important or not art at all, such as: photograph, sketches and deigns of many projects. Also, the Bauhaus united the Artist together as they were jointed in a group work to produce a beautiful brilliant piece of art. Therefore, the Bauhaus has effected the world from varies aspects. To sum up, I believe that the Bauhaus has effected and will effect our nations, since it based the way in which the artists think in the modern world and brought them to gather, as well as, different types of arts. More over, it will continue to affect the world, since it altered its aims through out the history to suite the economical and political demand and changed. 1208 words. ...read more.