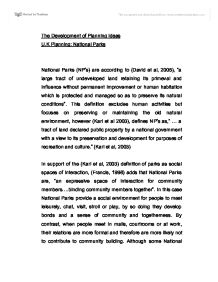 The Development of Planning Ideas U.K Planning: National Parks National Parks (NP's) are according to (David et al, 2005), "a large tract of undeveloped land retaining its primeval and influence without permanent improvement or human habitation which is protected and managed so as to preserve its natural conditions". This definition excludes human activities but focuses on preserving or maintaining the old natural environment, however (Karl et al 2003), defines NP's as," ... a tract of land declared public property by a national government with a view to its preservation and development for purposes of recreation and culture." (Karl et al, 2003) In support of the (Karl et al, 2003) definition of parks as social spaces of interaction, (Francis, 1998) adds that National Parks are, "an expressive space of interaction for community members....binding community members together". In this case National Parks provide a social environment for people to meet leisurely, chat, visit, stroll or play, by so doing they develop bonds and a sense of community and togetherness. By contrast, when people meet in malls, courtrooms or at work, their relations are more formal and therefore are more likely not to contribute to community building. Although some National Parks such as Fundy National park in Canada have similar ideas of social interaction but have however taken the idea of National Parks even more further. ...read more.

government of Canada offered the potentially much lower value to the owner, they also tended to inform landowners inadequately, set compensation as they saw fit and even set up their own boards to arbitrate dissent. (Andrew, 2001). Fundy National Park in Canada is a good example of the National Parks idea not only being about preservation of nature and primeval influence but rather it was reclaimed from existing communities and then was designed to be multifunctional. (Andrew, 2001). The swimming pool and golf course would fulfil sporting needs, an amphitheatre and handicraft school would fulfil cultural needs; cottages, hotels and compounds would fulfil accommodation needs; and a "town site" or gift shops and restaurants would fulfil consumer needs." Developments were to be the focus of visitor's experience. Creation of all these public amenities not only attracted lots of people it compromised local environment (David, 2005). This will be like literally bringing the city into the countryside. The city comes with all its problems of congestion, air, noise and water pollution and a general deteriorating environment which will lead to disruption of biodiversity life. (Andrew, 2001) sums the environmental damage of surrounding areas, "Roads needed to be straightened, hillocks fattened, ugly and misshapen trees cut down, stones removed, grass planted. It was a big project that involved use of over fifteen thousand cubic metres of topsoil". ...read more.

Nature was produced in national parks based on preconceived, cultural constituted visions of Africa as a primitive wilderness. Initially the vision included native people to continue living in their "primitive" within the park boundaries" (Karl, 2003) For example, in 1980, the government of Namibia planned to allow the Ju/wasi people to remain in inside a proposed game park if they hunted only on bow and arrows; economic development such as ranching was prohibited because it violated the imposed definition of "traditional" culture. The Ju/wasi people would become in essence, another tourist attraction. (Karl, 2003). The proposal of the Ju/wasi game park makes clear that Western preservationists are still captivated by a way of seeing traditional African society as living in aesthetic harmony with the landscapes of nature. (Karl, 2003) adds, "The British romanticised pre-contact African society through such ideas as the moral innocence of Africans, a respect for African bush skills and a generalised notion of a noble savage". National Parks are vital to human and the natural world. They not only provide people with beauty and scenery to marvel on, they have evolved over time in purpose and aims since the establishment of the idea by Americans to being multifunctional. The idea of NP's has also been adopted worldwide and has been used in different parts of the world for so many purposes. Today National Parks are important public spaces for reminding us of the past and for escaping the modern society. ...read more.