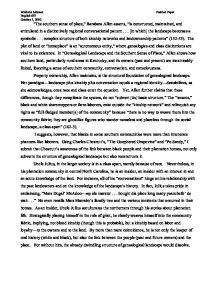 The genealogical landscape, then, that emerges from Chesnutt's stories reveals the interwoven bonds between blacks and whites and their senses of place.

"The southern sense of place," Barabara Allen asserts, "is constructed, maintained, and articulated in a distinctively regional conversational pattern . . . [in which] the landscape becomes a symbolic . . . complex structure of both kinship networks and landownership patterns" (152-53). The plot of land or "homeplace" is an "autonomous entity," where genealogies and class distinctions are vital to its existence. In "Genealogical Landscape and the Southern Sense of Place," Allen shows how southern land, particularly rural areas in Kentucky, and its owners (past and present) are inextricably linked, fostering a sense of southern community, conversation, and consciousness. Property ownership, Allen maintains, is the structural foundation of genealogical landscape. Her paradigm-landscape plus kinship plus conversation equals a regional identity-destabilizes, as she acknowledges, once race and class enter the equation. ...read more.

For instance, all of his "conversations" hinge on his relationship with the past landowners and on the knowledge of the landscape's history. In fact, Julius takes pride in exclaiming, "Mars Dugal' McAdoo-my ole marster . . . bought dis place long many years befo' de wah . . ." He even recalls Mars Marrabo's family tree and the various incidents that occurred in their homes. As an insider, Uncle Julius acculturates the northerners through his stories about plantation life. Strategically placing himself in the role of griot, he clearly weaves himself into the community fabric, implying, not blood kinship (though this is probable), but a kinship based on labor and loyalty-to the owners and to the land. By more than mere coincidence, he is not only the keeper of oral history (white and black), but also the link between the people (past and future owners) and the place. ...read more.

Because African Americans before and immediately after the Civil War were denied the opportunity to own property and because the "big house" was not place of communion for the slaves, a focal point for them was any part of the landscape they could use, covertly or openly, to develop a sense of place. As shown, the vineyard, the tree, and the schoolhouse symbolize the connection between the "tenants" and the land, and the owners. The genealogical landscape, then, that emerges from Chesnutt's stories reveals the interwoven bonds between blacks and whites and their senses of place. Traditional property ownership and kinship ties are not prerequisites for claiming the land on which one lives and works. Uncle Julius, masking as griot and trickster, locates and claims for himself and for his plantation family the historical "place" that they deserve and in turn, subverts the structure of genealogical landscape. ...read more.