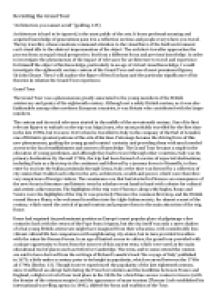 The Grand Tour of the Eighteenth Century and its Influence on Architecture.

﻿Revisiting the Grand Tour ?Architecture you cannot avoid? (golding, 125) Architecture is hard to be ignored, is the most public of the arts. It bears profound meaning and acquired knowledge of generations past, it is a reflection on time and people everywhere you travel. The lay traveller, whose emotions command attention to the visual force of the built environment can?t stand idle to the abstract impersonation of the object. The architect-traveller approaches the process from an equal visual perspective, but from a different focus and previous knowledge. In order to investigate the phenomenon of the impact of relevance for architecture to travel and experience for himself the object of his knowledge, particularly in an age of virtual visual knowledge, I would investigate the eighteenth century custom of the Grand Tour and one of most prominent figures, Sir John Sloane. Then I will analyze the figure of Rem Koohaas and the particular significance of his theories in relation the Grand Tour experience. Grand Tour The Grand Tour was a phenomenon greatly associated to the young members of the British aristocracy and gentry of the eighteenth century. Although not a solely British custom, as it was also fashionable among other northern European countries, it was Britain who contributed with the larger numbers. The custom and its social relevance started in the middle of the seventeenth century. One of its first relevant figures to embark on the trip was Inigo Jones, who most probably travelled for the first time in the late 1590s, but it was in 1613 when he travelled to Italy in the company of the Earl of Arundel, one of Britain?s greatest patrons of the arts of his time. ...read more.

It was during these years that England had began a somewhat architecture revolution with the city and the interior spaces being re-coded into classical themes. Soane was a follower of Adam and Inigo Jones, but the architect who became his mentor and encouraged him to pursue the grand tour was George Dance (1740-1825). Dance was chosen among dissatisfied members of the Incorporated Society of Artists to represent architecture in the newly Royal Academy. The academy successfully petitioned patronage from King George III (granted on December 10th 1760) (Stoud, 21). The creation of the Royal Academy and the close relationship between Soane and Dance, who he worked for a short time before moving on to Henry Holland’s practice (which he thought more practical) but with whom he kept an excellent friendship; was critical to the young Soane and his future development as an architect. Being a founding member of the Academy, it is doubtless that he encouraged Soane to join it. Joinig was also a requisite to opt for a travelling studentship, surely an ambition by now of the young Soane, who had attended the lectures being delivered by the likes of Thomas Sandby, Joshua Reynolds or William chambers, all of whom had experienced the awe and inspiration derived from travelling and studying abroad and were adamantly in favour of classical aesthetics. Soane successfully obtained the Silver medal of the Royal Academy with a drawing of the façade of Banqueting House in 1774 and after a failed attempt the following year, the Gold medal in 1776 with a drawing of a triumphal bridge (Stoud, 22-23). During the ceremony of the Golden medal, and probably through the connections of Sir William Chambers, Soane was introduced to the King George III, who awarded him one of the two available travelling studentships of the Academy. ...read more.

I believe this underlying elements give inklings into the missing pieces of a body of knowledge like is the history of architecture; in other to understand its current state of affairs. In Soane?s time, the close encounter with Roman architecture and engineering, and certain hints in to the its evolution from Greek architecture, gave Sloane and his contemporaries and better understanding of the world they came from and the necessary knowledge of how to adapt that classical knowledge into their own time. I think, that is one of the reasons why the English classical style is still favoured by large number of the public today, even more than other architectural styles that succeeded neoclassicism in Britain. In the same way, I believe that the type of knowledge gathered by Le Corbusier during his constant travelling in the last stage of his life, or Koolhaas during his formative years (and still now) provided them with a architectural tool for gathering new information about the changing nature of the built environment, and an intuition (sometimes self-fulfilling prophecies) about where it is leading. I think this could be a reason why Koolhaas has become such a prolific editor of architecture books but have not penned another theoretical manifesto since delirious New York. His experience have endowed him with inklings into acceleration nature of information and communication technologies applied to the future of architecture Koolhaas states that the word urbanism has lost all of its purpose and referential meaning and has become obsolete to represent the reality of the metropolitan built environment around us and that it should be replaced by the word city-marketing*. I can only assume that by the same logic, the world tourist, in reference to the architecture profession is indeed, equally obsolete and perhaps, it should be an indispensable attribute of the qualities of an architect. ...read more.