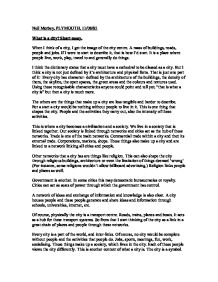 What is a city? Short essay.

Neil Morbey, PLYMOUTH, 11/08/82 What is a city? Short essay. When I think of a city, I get the image of the city centre. A mass of buildings, roads, people and jobs. If I were to start to describe it, that is how I'd start. It is a place where people live, work, play, travel to and generally do things. I think the dictionary states that a city must have a cathedral to be classed as a city. But I think a city is not just defined by it's architecture and physical form. That is just one part of it: Every city has character- defined by the architecture of the buildings, the density of them, the skyline, the open spaces, the green areas and the colours and textures used. ...read more.

Other networks that a city has are things like religion. This can also shape the city through religious buildings, architecture or even the limitation of things deemed 'wrong' (For instance, some religions wouldn't allow billboard advertising.) Religion links people and places as well. Government is another. In some cities this may democratic bureaucracies or royalty. Cities can act as seats of power through which the government has control. A network of ideas and exchange of information and knowledge is also clear. A city houses people and these people generate and share ideas and information through schools, universities, internet, etc. Of course, physically the city is a transport centre. Roads, trains, planes and boats. It acts as a hub for these transport systems. So from that I start thinking of the city as a link in a great chain of places and people through these networks. ...read more.

This could be older styles, to symbolise classicism or tradition. Or radical modernism style to symbolise technological superiority or city wealth. In this way too, does a city become a symbol. So, the city isn't just buildings and roads and architecture. It is also a hub of people and networks. These networks are constantly changing and are vastly complex. The city creates wealth and knowledge and interacts with lots of other people, places and cities. It is a link in a complex chain through transport, trade, money, government, religion, beliefs and ideas. Each city is different, though form and has its own character. Architecture, land use, road systems, green areas all shape the city and give it this character. A city is a symbol. Each person views the city slightly differently through there experiences and feelings. A city is a place where people live, work, play and travel to and from. It is many different things to many different people. Neil Morbey. 10/10/02. ...read more.