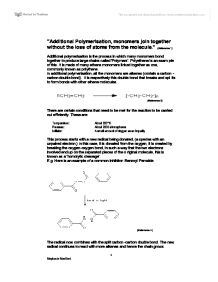 &amp;#147;Additional Polymerisation, monomers join together without the loss of atoms from the molecule.&amp;#148;

"Additional Polymerisation, monomers join together without the loss of atoms from the molecule." (Reference 1) Additional polymerisation is the process in which many monomers bond together to produce large chains called 'Polymers'. Polyethene is an example of this. It is made of many ethene monomers linked together as one, commonly known as polythene. In additional polymerisation, all the monomers are alkenes (contain a carbon-carbon double bond). It is respectively this double bond that breaks and splits to form bonds with other ethene molecules. (Reference 3) There are certain conditions that need to be met for the reaction to be carried out efficiently. These are: Temperature: About 200�C Pressure: About 2000 atmospheres Initiator: A small amount of oxygen as an impurity This process starts with a new radical being donated, (a species with an unpaired electron.) In this case, it is donated from the oxygen, it is created by breaking the oxygen-oxygen bond, in such a way that the two electrons involved end up on the separated pieces of the original molecule, this is known as a 'homolytic cleavage'. ...read more.

This allows it to be melted and remoulded into shape. Polypropene is also a thermosetting polymer, however it has three structural forms which all have different physical properties. If you look at the isotactic and syndiotactic structures, the chains can fit closely together due to the orderly -CH3 groups. This means that there will be regular strong intermolecular forces. This makes the structure stronger and more rigid. However the atactic form has an unorganised - CH3 group and therefore the chains cannot fit closely together. This produces a soft and very flexible polymer chain, having a low density and softening temperature. Serendipity has been the only way of improving the production of Polyethene. It all started March 24 1933 when an attempt to produce a ketone with a smaller pressure led to the discovery of a whit waxy solid which was later on discovered to be a polymer of Ethene. This process was repeated which led to many unfortunate outcomes such as many explosions. ...read more.

Zeiger and Natta did much work on this problem and came up with 'Zieger-Natta' catalysts. These used triethylaluminium catalysts. These produced longer, less branched chains which meant the chains could get closer together and form more intermolecular bonds which were stronger. With Ziegler-natta catalysts the polymer is produced at much lower pressures than the previous method, they are sensitive to oxygen; oxygen is used to polymerise monomers (see page 1). Polymers produced with Ziegler-natta catalysts have higher melting points than those produced by the old high-pressure method. This makes these polymers much more commercially useful than the previous high-pressure polymers. The catalysts allowed the polymer to grow outward from the catalsyst surface. E.g. Another catalyst metallocene causes a problem, as it is difficult to prepare. These catalysts allow the chemists to control the polymer's molecular mass as well as its structure. However scientists still don't have total control of the reaction. These catalysts only work on certain polymers up to a certain size of monomer. The catalyst may be poisoned causing the chain formation to stop if it becomes damaged. ?? ?? ?? ?? 1 Stephanie Strafford ...read more.