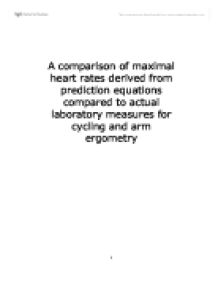 A comparison of maximal heart rates derived from prediction equations compared to actual laboratory measures for cycling and arm ergometry.

For this assignment I will aim to talk about the methods of predicting maximal heart rate that we used, the methods we undertook to get our results in the laboratory and then I will analyse these results and compare to how they should look if the predictive equations are correct.

Heart rate is used as a guide to set exercise intensity because of the relatively linear relationship between heart rate and VO2 max (ACSM, 2006, p.143 and ACSM, 2000; Londeree and Ames, 1976; Gilman, 1996; Zavorsky, 2000, all cited by Santos et al.,2005, p.270). It is best to measure maximal HR (HRmax) during a progressive maximal exercise test whenever possible because HRmax declines with age (ACSM, 2006, p.143). Finding HRmax is important for clinical and health reasons, for example a straight percentage of HRmax is used as a basis for prescribing exercise intensity in both rehabilitation and disease preventionprograms (ACSM, 2000; Fletcher, 1997, both cited by Tanaka et al., 2001, p.153).

Therefore we know that calculating maximal heart rate is important in the clinical and rehabilitation settings but its also important when testing subjects but getting accurate is complicated and unlikely unless performed using direct methods of assessment.

For our study we performed maximal exercise tests using arm and cycle ergometers, we done this as the highest HR values are obtained in maximal tests conducted in the laboratory (Santos et al., 2005, p.170) however maximal exercise testing is not feasible in many settings (Tanaka et al., 2001, p.153) and some aspects of testing for HRmax can be quite difficult to control for in the field (Santos et al., 2005, p.170), when this is the case HRmax is often estimated using the age-predicted equation of 220 – age (Tanaka et al., 2001, p.153; Robergs and Landwehr, 2002, p.2).

Although the age-predicted HRmax is the most commonly used as a basis for prescribing exercise programs, as a criterion for achieving maximal exertion and as a clinical guide during diagnostic exercise testing and despite its importance to this field the validity of the HRmax equation has never been established in a sample that included a sufficient number of older adults(Tanaka et al., 2001, p.153).

For our assignment we performed maximal exercise tests on an arm and cycle ergometer, during these test the investigators measured HR, RPE and power. Pre testing we measured physiological variables such as height, weight and resting heart rate, we also measured blood lactate content and RPE both pre and post-testing. Upon completion of all tests we recorded max RPE, power and HR values. Healthy male (n = 29) and female (n = 13) participants were recruited for this study with an average age for males of 19.82 ± 0.93 years and 20.08 ± 1.89 years for females, other variables tested for are presented in tables 1 and 2.

The methods of predicting HRmax that we used were 220-age; the

Cycling ergometry also followed a similar trend as arm ergometry as the output showed that F1, 40.07= 55.017, P < 0.05, therefore this shows there was also a significant difference in HR values and the predictive equations when exercise was performed on a cycle ergometer. 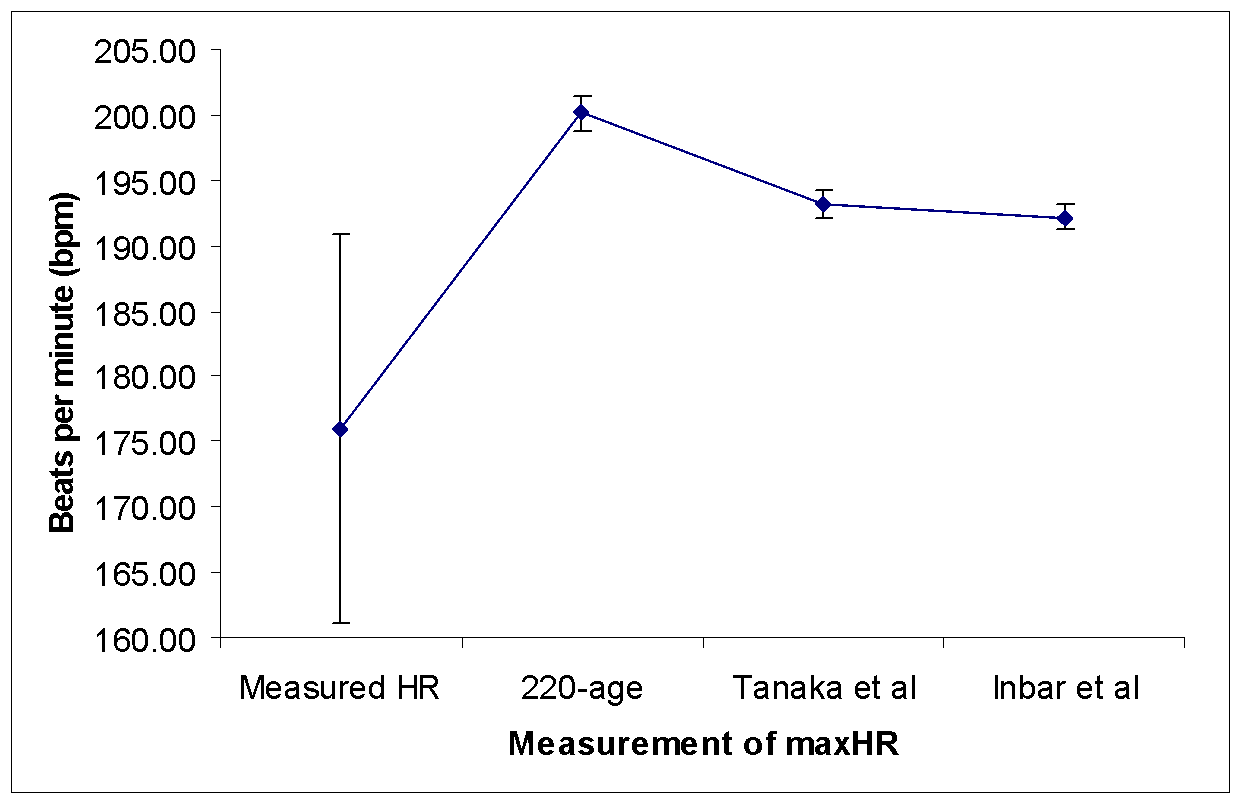 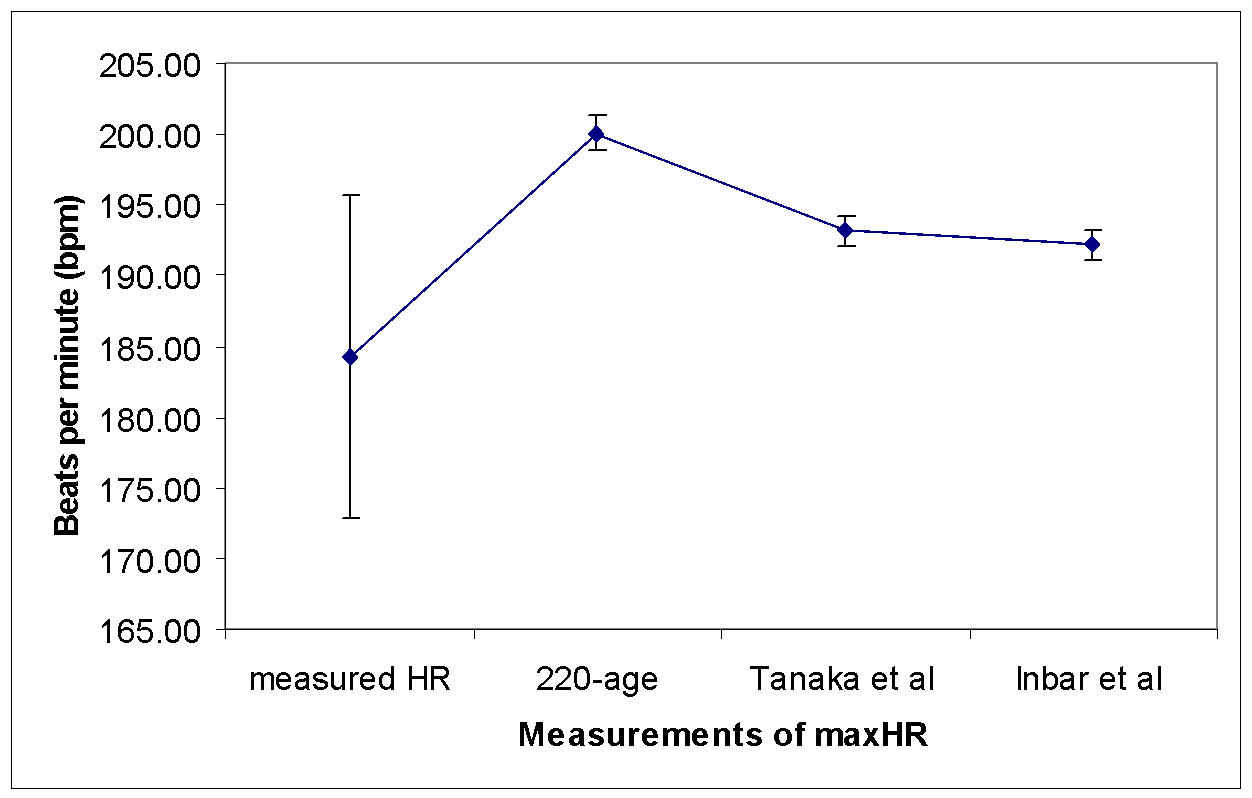 I get this reasoning from the fact that the equation by Inbar et al., 1994, is the most accurate general equation available but the error associated with this is still too large (Robergs and Landwehr, 2002). This is the case for our data as well because the means of measured maxHR and the equation by Inbar et al., 1994, are the closest of the three, with means for cycle ergometry of 184.27 bpm and 192.15 bpm respectively and the means of arm ergometry being 176.02 and 192.17 bpm, these values are still unacceptable though because there is too much variation. There is set criterion that must be met for a test to be passed as being maximal such as a HR within 10 bpm of age predicted values, I believe that the majority of these would not have been passed therefore the subjects may not have worked to their maximal effort which could have affected the reliability of the results.

For the analysis I combined male and females into either arm or cycle ergometry, my reasoning for this is that maxHR is predicted to a large extent by age alone independent of gender and physical activity status (Tanaka et al., 2001, p.155).

This study had some limitations that may affect its reliability and validity. Firstly the data collection was made by groups of at least 5 people and not an individual or a small number of people, this could have affected the testing procedures because people may have administered a test slightly different to another group. Secondly tests were administered over several weeks so it may have been a month between the two tests, this could again effect the results as the subject may have trained or detrained over this period. Thirdly some data was missing from the testing sheets as people had filled them incorrectly so a full data set may not have been obtained, this again could affect mean and SD values of anthropometrical measurements. Fourthly after all data collection was completed each group had to type their own data up from photocopied sheets, this could lead to type I errors by people putting in the wrong values so there may be variability between one groups analysis and another groups. Fifthly the guidelines of a maximal VO2 max test were not followed so the test may not have been truly maximal which is what the test was meant to be to get the most accurate maxHR values as possible.