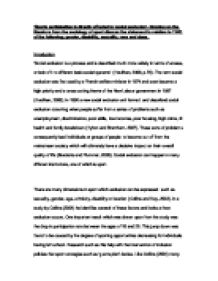 Sports participation is directly affected by social exclusion. Drawing on the literature from the sociology of sport discuss the statement in relation to TWO of the following; gender, disability, sexuality, race and class.

'Sports participation is directly affected by social exclusion'. Drawing on the literature from the sociology of sport discuss the statement in relation to TWO of the following; gender, disability, sexuality, race and class. Introduction 'Social exclusion is a process and is described much more widely in terms of access, or lack of it to different basic social systems' (Houlihan, 2008, p.78). The term social exclusion was first used by a French welfare minister in 1974 and soon became a high priority and a cross cutting theme of the New Labour government in 1997 (Houlihan, 2008). In 1998 a new social exclusion unit formed and described social exclusion occurring when people suffer from a series of problems such as unemployment, discrimination, poor skills, low incomes, poor housing, high crime, ill health and family breakdown (Hylton and Bramham, 2007). These sorts of problems consequently lead individuals or groups of people to become cut off from the mainstream society which will ultimately have a decisive impact on their overall quality of life (Macionis and Plummer, 2005). Social exclusion can happen in many different institutions, one of which is sport. There are many dimensions in sport which exclusion can be expressed such as sexuality, gender, age, ethnicity, disability or location (Collins and Kay, 2003). In a study by Collins (2004) he identifies several of these factors and looks at how exclusion occurs. One important result which was drawn upon from the study was the drop in participation rate between the ages of 16 and 25. ...read more.

Those in power therefore take the full benefits of sport. Sport is run by wealthy owners and large corporations who have capitalist values and have a lifestyle based on competition and production. When people accept capitalist values without any question sport becomes a source of false and unrealistic sense of social life (Nixon, 2008). Research has been conducted on conflict theory. Rinehart and Grenfell (2002) study looks at how a simple grass root scheme of a BMX park in a socially deprived area is placed there with the intentions of gaining profit and making money for the wealthy. Looking back at past research, conflict theory was used in Flint and Eitzen's (1987) study on professional sports team ownership and entrepreneurial capitalism. From their research they came up with three arguments. Firstly sports team owners do not maintain the social and corporate linkages found among capitalists in other industries. Secondly, these owners participate in the sports industry because it is both profitable and secure. Finally, the workings of a self- regulating monopoly and the popularity of sport enhance the reproduction of capitalist social relations and ideology (Flint and Eitzen, 1987). Both these pieces of research suggest that conflict theory is correct and sport involves financial and economic gain for the wealthy while the lower classes are exploited. However some sociologists would argue that conflict theory ignores that it may be possible for sports to have a positive on individuals and groups. ...read more.

Nevertheless there is still issues in both topics which still need addressing, predominately the access lower classes have to upper class sports and the lack of media attention that the women face. However it is important that it is not assumed that these two groups are the only groups affected by social exclusion. In many of the studies class and gender were related to race, whilst we must not forget that the disabled and older ages are less likely to take part in sport. Not only is this the case in sport but all different groups of people need to be accounted for in sociology if wider patterns are going to be found in institutions such as education and health. (Nixon, 2008). It is clear there is a growing amount of data gathering on social exclusion, however it is important that we don't assume that all data is legitimate and correct. Questions in sociology are always asked on the study technique of the researcher. There may be problems with the methodology or the interpretation of the data. For example a researcher who is interviewing an individual or group may cause them to act differently and cause interviewer bias, where an observation made by one person may be interoperated differently to another person. All in all, generally research is a good indication of the real social world and it is nearly impossible for research not to have faults (Z. Greaves, S. Kirkby and C.Reid, 2006). ...read more.