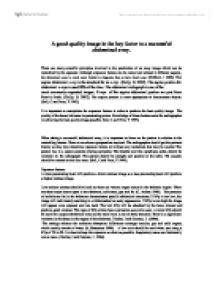 A good quality image is the key factor to a successful abdominal x-ray.

A good quality image is the key factor to a successful abdominal x-ray.

There are many scientific principles involved in the production of an x-ray image which can be controlled by the operator.Although exposure factors can be varied and altered in different aspects, the abdominal x-ray is much more limited in diagnosis than a basic chest x-ray. (Bicklem, I 2006) The supine abdominal x-ray is the standard for an x-ray.  (Kelly, B. 2002). The supine postion for abdominal x-rays is used 99% of the time. The abdominal radiograph is one of the

most commonly requested images. X-rays  of the supine abdominal postion are past from front to back. (Kelly, B. 2002). The supine positon is more appropriate to demonstrate objects. (Ball, C and Price, T 1995).

When taking a successful abdominal x-ray, it is important to focus on the patient in relation to the controlling factors. There is no advance preparation required. The radiographer should get the patients history as they may determine exposure factors or inidcate any varitations that may be needed. The patient lies in a supine position (facing upwards). The bladder and the symphysis pubis should be included on the radiograph. The patient should be straight and parallel to the table. The cassette should be centred to the iliac crest. (Ball, C and Price, T 1995).

Low subject contrast should be used as there are various organ tissues in the abdomin region. There are three major tissue types in the abdomen, soft tissue, gas and fat. (C, Andrea 1998).   The pressure of radiolucent fat in the abdomen demonstrates specific abdominal structures. If kVp is too low, the image will lack density resulting in a whitewashed or sooty appearance. If kVp is too high the image will appear over exposed and too dark. The low kVp will be absorbed by the bone mineral and produce good contrast. This type of kVp allows bone evaluation easy to be seen. A lower kVp should be used for a supine abdominal x-ray as the main focus is not on bony structure. There is a significant variation in thickness in the organs of the abdomen. Hecker, J and Garreau, J . (2004).

The settings enhance the radiation absorption differences amongst muscles, gas and solid organs, which mainly consist of water. (k, Martensen 2006) .  A low mAs should be used when you using a kVp of 70 to 90. It is best to keep the exposure as short as possible. Respiratory issues are fortunately not an issue. (Hecker, J and Garreau, J . 2004)

The smallest focal spot size should be used for the exposure. When the focus spot is small, the recorded detail increase and there is a decrease in unsharpness. (Fauber, T 2009) However the smallest focus spot does not have be selected to produce the best quality image. Although it produces the best resolution, image quality also relies on contrast characteristics. The smaller the focal spot size the less photon flux can be produced. The mA level must be also significant to produce the optimum image. (Brant, F 2000)

Low energy photons are absorbed by superficial tissues of a patient. Therefore they would make no contribution to the radiograph. (graham pg 281) X-ray beam filtration may be required to overcome the deficiency (Brant, F 2000). Filtration effects the quality of the produced image . If the filtratrion is thicker in the x-ray beam it will have a greater quality of x-ray beam coming from the x-ray tube (graham pg 281)

Scatter radiation adds unwanted denisity to the image, decreasing image quality. When a scatterd photon strikes the image receptor, it does not improve the image quality. These must be controlled during radiographic imaging.  . (graham pg 281)

Artefacts can be distracting and can compromise accurate diagnosis. inCorrect collimation may be a cause of unwanted artefacts in the radiograph.The image detector adds to image quality due the images’ inability to show movenvemt. The selected detector is activtly measuring radiation exposure. If an the appropriate detector is failed to be used results in a radiograph being either overexposed or underexposed. (Fauber, T 2009).

In accordance with the principle ALARP, it may not result in the optimum quality image acheivable. ALARP governs patient protection issues. For example if the patient is pregnant, the benefit of the radiography outweights the risk to the fetus. If the abdominal x-ray were for a pregnant woman , the chances are that the optimised x-ray image would not be achieved. It is important to limit the exposed by the use of collimation so that only the areas of interest will be subjected onto the radiograph. (Nicholas, J. 2006).

The varying amounts of transmitted and absorbed radiation produce and image representing the anatomic are of interest. 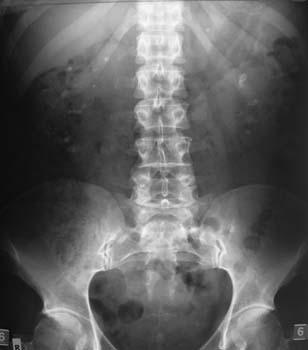 The above image shows an x-ray of an abdomien in the supine position. For an Abdominal x-ray as such there is no advance preparation required. The radiographer should measure the abdomen for a manual technique as different abdomens can vary in thickness greatly. Pg 156 (Fauber, T 2009).  The radiographer should get the patients history as they may determine exposure factors or inidcate any varitations that may be needed. The patient lies in a supine position (facing upwards). The bladder and the symphysis pubis should be included on the radiograph. The patient should be straight and parallel to the table. The cassette should be centred to the iliac crest. (Ball, C and Price, T 1995).