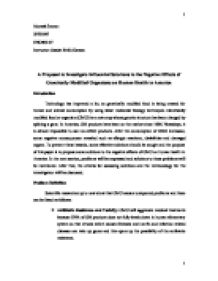 Mustafa Inanici 20701987 ENG400-07 Instructor: Saadet Birlik Karaca A Proposal to Investigate Influential Solutions to the Negative Effects of Genetically Modified Organisms on Human Health in America Introduction Technology has improved a lot, so genetically modified food is being created for human and animal consumption by using latest molecular biology techniques. Genetically modified food or organism (GMO) is a new crop whose genetic structure has been changed by splicing a gene. In America, GM products have been on the market since 1996. Nowadays, it is almost impossible to see non-GMO products. After the consumption of GMO increased, some negative consequences revealed such as allergic reactions, disabilities and damaged organs. To prevent these hazards, some effective solutions should be sought and the purpose of this paper is to propose some solutions to the negative effects of GMO on human health in America. In the next section, problems will be expressed and solutions to these problems will be mentioned. After that, the criteria for assessing solutions and the methodology for the investigation will be discussed. ...read more.

For instance, the gene can activate or deactivate other genes. Thus, this can cause mutations. For example, an experiment, which is about the consequences of mice that fed with GM food performed in America and mutation, has occurred such as mice had smaller and partially atrophied livers. > Fear of Unknown: GMO has been a controversial debate between scientists and consumers. No one can say it is absolutely healthy or harmful. In 1980's, a brand of a food supplement called L-tryptophan killed about 100 Americans and caused illness and disability in another 5.000 people[2]. Some studies are examined on rats, which fed with GM potatoes. There are some negative results observed such as damaged intestines, meager weight gain and damaged immune system[1]. > Potential Allergenicity: In America, many children have developed life-threatening allergies to GM products. Moreover, soy allergies increased by %50, soon after GM soy was started consuming[2]. Experts mentioned that there is a possibility of creating a new allergen with adding a different gene to a plant. Some diagnosed cases showed that GM foods could trigger new allergic reactions to non-GM foods. ...read more.

For instance, before adding GMO to curriculum, it should be thought that whether schools have qualified personnel and materials or not. > Acceptability: All solutions should be examined whether they are acceptable or not. For example, some GMO producing firms can protest the extra tax and to protect their profit, they can fire some of their employees. > Sustainability: Solutions should be carried out sustainably in order for them to work as planned. Short-term implementations will not be sufficient for an exact result. Methodology > An interview will be arranged with Assoc. Prof. Dr. Serta� �nde who is an academic member of Middle East Technical University(METU). > A search will be performed to observe the tendency of farmers to produce GM products. > Lastly, some research will be done via Internet to find scientific articles about negative effects of GMO on human health. There are some reliable websites such as "pubmed.com" and "isiknowledge.com" and these sites are used by academic members as well. ...read more.