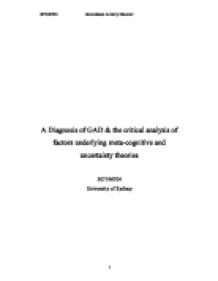 Abnormal Psychology Case Study - A joint diagnosis of Generalised Anxiety Disorder and Social Phobia Disorder was given which accounted for the symptoms that Isabella was presenting with in accordance to the DSM-IV and proposed DSM-V. To further analyse t

A Diagnosis of GAD & the critical analysis of factors underlying meta-cognitive and uncertainty theories 307196704 University of Sydney Abstract On evaluation of Isabella's symptoms, it was ruled out that she did not suffer from a panic disorder, but rather she suffered from panic attacks associated with an anxiety disorder. A joint diagnosis of Generalised Anxiety Disorder and Social Phobia Disorder was given which accounted for the symptoms that Isabella was presenting with in accordance to the DSM-IV and proposed DSM-V. To further analyse the cause and treatment of such disorders, meta-cognition theory and uncertainty theory were evaluated to determine the role that worry plays in the negative feedback system of a GAD sufferer. Both theories provide interesting insight into Isabella's case however, as every case is unique, more research and insight is needed. Isabella, a 29-year-old woman, first presented to her GP complaining of breathing difficulties, heart problems, sweating and faintness. Her GP found no evidence to suggest a physical problem and hence suspected that she may have a panic disorder. Upon further analysis of Isabella's symptoms however, we find that although Isabella does seem to suffer from panic attacks, her symptoms are not entirely consistent with Panic Disorder (PD) as outlined in the Diagnostic and Statistical Manual of Mental Disorders (DSM-IV). Although some of Isabella's self-reported symptoms are consistent with the DSM-IV (American Psychiatric Association, 2000) diagnostic criteria for PD, not all the criteria is appropriately satisfied. ...read more.

In relation to Generalised Anxiety Disorders, one such proposed change has been to criterion C. Andrews G et al (2010), suggest that there is limited evidence for the DSM-IV threshold of 3 or more symptoms but rather one of two symptoms: restlessness or feeling keyed up or on edge; and muscle tension. With particular reference to Isabella, this may see her diagnosis of GAD completely changed. Isabella never specifically states that she is restless or on edge, however she does report that she finds it difficult to relax. The problem with the new criteria is that it may not be specific enough to diagnose Isabella's disorder; alternatively we may just need to obtain additional information from Isabella or her treating physician. The admission of criterion D in the proposed DSM-V would however, make the diagnosis of GAD much more suitable to patients such as Isabella as it identifies certain behaviours where at least one must be observed (in this case, avoidance). In regards to Dysthymic Disorder, with the modification of criterion D under the proposed DSM-V, a diagnosis of Dysthymic Disorder would be much more easily applied. The new criterion states, "over the last 2 years, there is a period of two months or longer during which the full criteria for a major depressive episode are not met" (American Psychological Association, 2012). Thus, although we were previously hesitant to diagnose a Dysthymic Disorder, under the DSM-V model, a diagnosis is much more easily applied. ...read more.

The cycle ends up becoming a negative feedback system in which the mechanism to cease the worry becomes unavailable to the sufferer taking it's toll on the individuals emotions. This type of worry is particularly relevant to Isabella's case. As was seen in her presentation, her worrying about worrying caused her to go into a panic attack because she was so concerned about worrying strengthening the internal worrying negative beliefs. More recent research has show that this metacognitive model can be helpful in actually diminishing anxiety by experiencing the effects of worrying (Ellis & Hudson, 2010). This can cause problems for GAD patients however, who instead of experiencing the worry and learn the controllable associations involved, they actually avoid and suppress the triggers embracing certain suppression and distraction mechanisms. Although the link between uncertainty and worry remains unclear, further research may be able to attempt to shed light on its current relationship (Buhr and Dugas et al, 2001). One of the hardest obstacles for abnormal Psychologists is the diagnosis and treatment of mental disorders. It becomes necessary to rule out what a patient is not suffering from as a wrong diagnosis can have detrimental effects on the wellbeing of a patient. Furthermore, once a correct diagnosis is reached, there is no guarantee that the patient will be able to get better. The ongoing research into GAD and the links it has with worry are just one of the many promising areas of research that will increase our understanding and diagnosis of anxiety disorders such as that suffered by Isabella. ...read more.