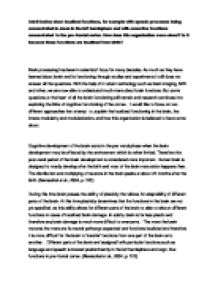 Adult brains show localized functions, for example with speech processes being concentrated in areas in the left hemisphere and with executive functions concentrated in the pre-frontal cortex. How does this organization come about? Is it because these fu

Adult brains show localized functions, for example with speech processes being concentrated in areas in the left hemisphere and with executive functions concentrated in the pre-frontal cortex. How does this organization come about? Is it because these functions are localized from birth? Brain processing has been in scientists' focus for many decades. As much as they have learned about brain and its functioning through studies and experiments it still does not answer all the questions. With the help of modern technology such as brain imaging, MRI and other, we are now able to understand much more about brain functions. But some questions at the heart of all the brain functioning still remain and research continues into exploring the links of cognitive functioning of the cortex. I would like to focus on two different approaches that attempt to .explain the localized functioning in the brain, the innate modularity and modularization, and how this organization is believed to have come about. Cognitive development of the brain starts in the pre-natal phase when the brain development may be affected by the environment which is rather limited. Therefore the post-natal period of the brain development is considered more important. Human brain is designed to mostly develop after the birth and most of the brain maturation happens then. The distribution and multiplying of neurons in the brain peaks at about 24 months after the birth. ...read more.

And it surely can be applied in pre-natal period of the brain development. However the evidence gathered through modern technology shows that the most important neural activity happening in the brain after the birth is the main factor influencing the development of the brain. As supported by Petersen et al. (1990) and their experiment using PET scan and test of English words with native and foreign speakers which showed that particular part of cortex in native speakers responded to English words. This suggests that the exposure to same environment led to the development of a particular processing area in the cortex of their left hemisphere to process English language. The results of this experiment support the 'modularization' theory. (Mareschal et al., 2004, p. 130) As much as modern technology helps to find evidence, some forms of it may not be suitable for young children as their affects on children's health are not known and may be harmful. Future possibilities of open scans may allow for more research in this area. Karmiloff-Smith (1992) also introduces the theory of self-organizing system based on the ability of the brain to organize information into structures when exposed to a particular environment. Based on the theory of Hebb (1949) which states that in order for the localized functions to work simultaneously and being able to create particular pathways an important rule of repetition comes into place. ...read more.

This changes as the functions in the cortex are further specialized and localized and the role of pre-frontal cortex decreases. Evidence here presented shows that the nativist viewpoint is supported to certain extent by cognitive neuroscience but is outweighed by evidence of plasticity and the ability of other regions of the brain taking over the damaged areas in early development if needed without need of 'pre-specification'. This shows that in typical or atypical development that may be caused by localized damage to the brain seems to be the a product of development supporting the theory of 'modularization'. [Kate1] Bridging the gap between physical structure of the brain and its function proves to be a major challenge. It is certainly difficult to prove which of the two theories is right as it shows that both of them seems to be correct in particular aspects of the research and different evidence supports both of them. Although some of the evidence points in favour of innate modularity theory more of the evidence suggests that modularization theory is more at place. It is still argued between these two theories whether the functioning of the brain is innate and 'pre-fabricated' from birth or whether the environment plays important role in the development of localized functioning. Evidence presented in this essay clearly indicates that modularization is supported more than innate modularity. Even with the help of modern technology scientist are still unable to specify which of the theories may be more or less correct and the ongoing argument is so yet to be settled. ...read more.