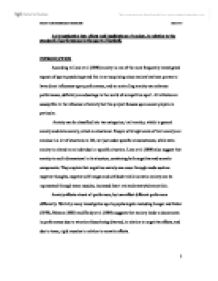 An investigation into effects and implications of anxiety, in relation to the standard of performance in the sport of football.

An investigation into effects and implications of anxiety, in relation to the standard of performance in the sport of football. INTRODUCTION According to Lane et al (1999) anxiety is one of the most frequently investigated aspects of sports psychology and this is not surprising since anxiety has been proven to have direct influences upon performance, and so controlling anxiety can enhance performance, definitely an advantage in the world of competitive sport. All athletes are susceptible to the influence of anxiety but this project focuses upon soccer players in particular. Anxiety can be classified into two categories, trait anxiety, which is general anxiety and state anxiety, which is situational. People with high levels of trait anxiety are anxious in a lot of situations in life, not just under specific circumstances, while state-anxiety is related to an individual or specific situation. Lane et al (1999) also suggest that anxiety is multi-dimensional in its structure, containing both cognitive and somatic components. They explain that cognitive anxiety can occur through media such as negative thoughts, negative self images and self doubt while somatic anxiety can be represented through tense muscles, increased heart rate and sweaty/clammy skin. Anxiety affects almost all performers, but can affect different performers differently. Work by many investigative sports psychologists including Langer and Imber (1979), Masters (1992) and Hardy et al (1996) suggests that anxiety leads to decrements in performance due to attention focus being diverted, in relation to cognitive effects, and due to tense, rigid muscles in relation to somatic effects. A substantial understanding of anxiety is imperative for sports psychologists, whose role it is to provide suitable and well-timed procedures in order to mentally prepare athletes for the next performance (Hanton et al 2002), especially in the world of professional soccer. The findings from this research project will aid the understanding sports psychologists have of competitive anxiety and how it affects different athletes. ...read more.

showed that inter-correlations between the components of anxiety provided sufficient factorial validity. Due to the fact the CSAI-2 is still the most commonly used measure of anxiety, it was employed as a foundation for the questionnaire used in this project, giving a proven and quantitative form of data collection for our data collection. Some of the questions in the original CSAI-2 were removed and others altered in order to give direction and relevance to this study and also to link some of the issues arising from the interviews. The validity of the questionnaire was maintained because the same four point Likert scale scoring system was used. By modifying the original CSAI-2, the reliability and relevance to this study was increased, making the test more reliable than the original CSAI-2 would have been. By incorporating two methods of data collection, any correlations in one can be cross-referenced and supported supported by similar patterns in the other. Using both quantitative and qualitative methods of data collection gives more reliable findings and any conclusions can be supported by either specific examples or by statistics. The procedure for both methods was very simple. The interviews were conducted on individual subjects in isolation from others. Each interview was of approximately ten minutes duration. In total eight interviews were conducted, four from each target population. Transcriptions were made of what the subjects said, and each subject was made aware of the fact that records were being taken, providing opportunity to refuse the interview if they were uncomfortable with the setting. Subjects were asked initial questions to guide them along a relevant course of conversation, with supporting questions used as prompts when necessary. Subjects were ensured confidentiality would be ensured and with no names recorded, so was anonymity. Questionnaires were simply distributed to the athletes who completed them at a time convenient for them, but with a researcher in proximity should they have any queries. ...read more.

CONCLUSION Anxiety intensity levels and symptoms have been proven to be the same no matter what standard of football the subjects played, however the interpretations of anxiety varied between the subject populations. Elite athletes interpreted anxiety in as more facilitative to performance than non-elite athletes and higher self-confidence of elite the athletes is probably the reason for this difference. The implications of these findings could be employed by sports psychologists, football coaches and captains of football teams alike, in order to enhance the performance of players and therefore the team. These individuals must concentrate on enhancing the self-confidence their players in order to encourage them to interpret anxiety as facilitative to performance rather than debilitative. Using a combination of methods for data collection, interviews and questionnaires, was a successful technique that provided reliable and valid results. Results from the questionnaires were reflected in the interviews and visa-versa. Although some questions for the questionnaire were introduced due to issues arising in the interviews leading to expectations of some correlation between these two methods, some of the most significant correlations came from questions independent of the interview process. Both these methods were simple to implement and not very time consuming, making them effective and practical measures to use. One possible limitation of this project could be the fact that out of twenty-three questions, only four provided significant results. This could be due to their being no significant difference between the groups, but it could also be because the sample populations were of a performance standard too similar. University footballers are selected from college teams and so the standard of university football is higher, but the difference between the two levels may not be sufficient to represent differences in anxiety related to performance standard. Repetition of this project should take this into account and use college football in contrast to a standard much higher than university football, such as semi-professional or professional football. Possible extensions to this project could involve the research into effects of anxiety upon performance, by analysing the performance of footballers in competitive situations under different levels of induced anxiety. ...read more.