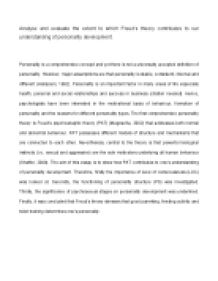 Analyse and evaluate the extent to which Freuds theory contributes to our understanding of personality development.

﻿Analyse and evaluate the extent to which Freud?s theory contributes to our understanding of personality development. Personality is a comprehensive concept and yet there is not a universally accepted definition of personality. However, major assumptions are that personality is stable, consistent, internal and different (Hampson, 1992). Personality is an important factor in many areas of life especially health, personal and social relationships and success in business (citation needed). Hence, psychologists have been interested in the motivational basis of behaviour, formation of personality and the reasons for different personality types. The first comprehensive personality theory is Freud?s psychoanalytic theory (PAT) (Magnavita, 2002) that addresses both normal and abnormal behaviour. PAT possesses different models of structure and mechanisms that are connected to each other. Nevertheless, central to the theory is that powerful biological instincts (i.e., sexual and aggressive) are the sole motivators underlying all human behaviour (Shaffer, 2009). The aim of this essay is to show how PAT contributes to one?s understanding of personality development. Therefore, firstly the importance of level of consciousness (LOC) was looked at. Secondly, the functioning of personality structure (PS) was investigated. Thirdly, the significance of psychosexual stages on personality development was underlined. Finally, it was concluded that Freud?s theory stresses that good parenting, feeding activity and toilet training determines one?s personality. ...read more.

For example, a study by Patton (1992) supported dynamic unconscious by demonstrating fear of abandonment is one variable underlying binge eating episodes in bulimia. Another study by, Rosenwald (1972) showed that some male students assessed as having anal anxiety were also the most obstinate and compulsively neat. Taken together, Freud?s theory explains the formation of personality as an outcome of a battle between infants? biological instincts and imposed social constraints by the parents. Although Freud explicitly emphasized the role of strong biological impulses in personality development, it is evident that the power of the social constraints rules over how these needs are met. PAT underlines the quality of parenting especially in activities as such feeding and toilet training as a major determiner of one?s personality. Thus, passing the first two stages successfully allows the child to resolve conflict and mixed feeling toward the parents on its own. Subsequently, good parenting enables child to continue the journey by interacting with same-sex peers and others until the self-centred-pleasure seeking infant transforms into a well-socialized caring adult (Carver &Scheier, 2004). However, despite including social factors by symbolizing parents as representers, PAT does not explain how reference groups, media, interaction with peers and others affect personality. Finally, although Freud?s theory indicates gender difference in the phallic stage, there is no indication how fatherless or motherless children develop personality at that stage. A further study should investigate penis envy and castration anxiety among people who were brought up without father or mothers. ...read more.