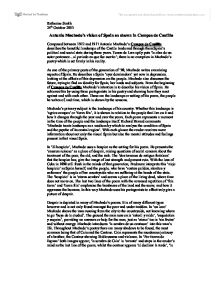 Antonio Machado's vision of Spain as shown in Campos de Castilla Composed between 1912 and 1917 Antonio Machado's Campos de Castilla describes the beautiful landscape of the Castile lands and through them Spain's political and social state during these years. Tunon de Lara aptly puts 'la obra de un autor pertenece...al periodo en que fue escrito'; there is no exception in Machado's poetry which is set firmly in his reality. As one of the primary poets of the generation of '98, Machado writes examining aspects of Spain. He describes a Spain 'ayer dominadora' yet now in depression, looking at the effects of this depression on the people. Machado also discusses the future, trying to find an identity for Spain, her lands and subjects. From the beginning of Campos de Castilla Machado's intention is to describe his vision of Spain. He achieves this by using three protagonists in his poetry and showing how they react against and with each other. These are the landscape or setting of his poem, the people he writes of, and time, which is shown by the seasons. Machado's primary subject is the landscape of his country. Whether this landscape is 'agrios campos' or 'tierra fria', it is shown in relation to the people that live on it and how it changes through the year and over the years. ...read more.

This topic relates directly to events in Spain at the end of the 19th century, where a series of horrific murders in the countryside, in one case of a father by his sons, shocked the Spanish media and society. Machado may seem extreme in his judgement of peasant avarice yet these poems are a statement of human life. Robin Warner discusses this theme of deviance and vice, talking of the 'degenerate national obsession with deviance'. Whilst Machado's aim may be to highlight the fact that deviance is naturally part of society, he also shows how in times of political and social extremes, this deviance takes on a different and more important role, a substitute for order. Machado gives examples of tolerated deviance in his poems such as gambling, directly linking his work to events in Spain and the unsuccessful proposal in 1912 to introduce the controlled legalisation of gambling. 'El manana efimero' continues the theme of deviance with a series of negative images relating to the present moral decline; a Spain 'inferior que ora y bosteza'; 'un borracho ahito de vino malo'; 'Esa Espana...vieja y tahur'. The pessimism expressed referring to the present state of Spain and the lands of Castile presents not only the social and economic factors as problems, but also the human attitude. ...read more.

By taking himself as a poet out of his poetry he shows that there is no individual, only a people and a common cause. Machado said 'mis romances miran a lo elemental humano, al campo de castilla y al libro primero de moises, llamado genesis'. Using as his protagonists the most basic elements on the earth; people, our setting, and the passage of time, Machado indeed looks at 'lo elemental humano'. As a philosopher as well as poet, Machado also presents the fight between good and evil, this primary fight played out in the prelapsarian garden of Eden. With the repeated images of Cain and the shadows that follow humans Machado examines the essence of human nature and the effects of suffering and trauma on humans. However, although Machado does all this and his poetry could be seen as a philosophical statement, the Spanish poet writes primarily about his country and his people. He describes suffering, faithlessness, and vice but also hope for a different future. His portrayal of the landscapes and countryside of Spain show a love and knowledge of that country, yet too he criticises her loss of glory, her haughtiness and decadence. Machado presents these contrasting images of a country in a time of social and political change in Campos de Castilla, involving the reader in his vision of humans, and of Spain. Katherine Smith 24th October 2003 ...read more.