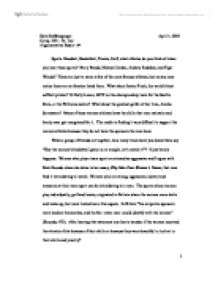 Katie Raffensperger April 4, 2005 Comp. 200 - Dr. Lee Argumentative Essay - #4 Sports. Baseball, Basketball, Tennis, Golf; what athletes do you think of when you hear these sports? Barry Bonds, Michael Jordan, Andrew Roddick, and Tiger Woods? Those are just to name a few of the most famous athletes, but as you may notice there are no females listed there. What about Jennie Finch, the world's best softball pitcher? Or Betty Lenox, MVP on the championship team for the Seattle Stars, or the Williams sisters? What about the greatest golfer of her time, Annika Sorenstam? Many of these women athletes have the skills that men maintain and barely ever get recognized for it. The media is finding it very difficult to support the women athletes because they do not have the sponsors the men have. When a group of friends are together, how many times have you heard them say "Hey the women's basketball game is on tonight, let's watch it!"? It just barely happens. Women who play a team sport are viewed as aggressive and I agree with Kate Rounds when she states in her essay, Why Men Fear Women's Teams, that men find it intimidating to watch. Women who are strong, aggressive, sweaty and awesome at their team sport can be intimidating to a man. ...read more.

As I was doing research on women athletes, I tried to find a famous player from each televised sport. In Softball, the best pitcher in the league is Jennie Finch. Her team won gold in the 2004 Olympics, and she is known for her strike out windmill pitch. Coming from a person that loves sports, I truly had no idea Finch is as good as she is. I've seen her face on SAK advertisements (handbags) but I did not realize that she was part of the Olympic Softball team. The women who are tied into sports are always recognized for their sex first and barely ever for their sport. After Randy Chasteen won the World Cup in 2000, she was so excited she took off her shirt and was running around the field waving her shirt above her head. What was on the cover of the next Sports Illustrated? Not her winning team, but Chasteen, herself, on her knees just in a sports bra and shorts. After that incident she was asked to be a guest on may talk shows and the first words out of the interviewers mouth was about her shirt incident. Why did you take off your shirt? What does that signify? Did you think before you did it? ...read more.

The media and the people in today's society are all contributors to this image put upon women athletes. As the women of today are playing sports and becoming greater athletes the chances of them being recognized for their athletic abilities and natural talent for the sport is very slim. The media is full of sexual intentions and judging a person from only the outside. It is sad how the media only starts to support the women athletes because of the fact that they have tiny waists and great legs, or large breasts. Because they know people will watch them perform if they are attractive. Women athletes all over the world are struggling to be known for their talents and it is going to take more than one media company like ESPN to make a difference. Local businesses and cities have to start making women's stadiums and advertisements for women's sports, anything that will help them become more well known without having to exploit their bodies. Hopefully now that our society is in the 21 century they will start to mature and learn to accept people the way they are instead of creating everything with a sexual appeal. It has taken a long time to get where we are today, but it is still not good enough. ?? ?? ?? ?? 1 ...read more.