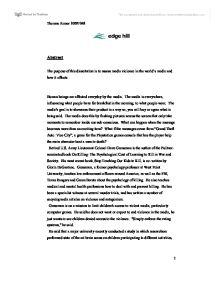 Abstract The purpose of this dissertation is to assess media violence in the world's media and how it affects Human beings are affected everyday by the media. The media is everywhere, influencing what people have for breakfast in the morning, to what people wear. The media's goal is to showcase their product in a way so, you will buy or agree what is being said. The media does this by flashing pictures across the screen that only take moments to remember inside our sub-conscious. What can happen when the message becomes more than an exciting item? What if the messages come from "Grand Theft Auto: Vice City", a game for the Playstation games console that has the player help the main character beat a man to death? Retired U.S. Army Lieutenant Colonel Dave Grossman is the author of the Pulitzer-nominated book On Killing: The Psychological Cost of Learning to Kill in War and Society. His most recent book, Stop Teaching Our Kids to Kill, is co-written by Gloria DeGaetano. Grossman, a former psychology professor at West Point University, teaches law enforcement officers around America, as well as the FBI, Texas Rangers and Green Berets about the psychology of killing. He also teaches medical and mental health professions how to deal with and prevent killing. He has been a specialist witness at several murder trials, and has written a number of encyclopaedia articles on violence and antagonism. Grossman is on a mission to limit children's access to violent media, particularly computer games. He said he does not want or expect to end violence in the media, he just wants to see children denied access to the violence. "Simply enforce the rating systems," he said. He said that a major university recently conducted a study in which researchers performed state of the art brain scans on children participating in different activities, reading a book, hearing a story, watching a violent movie and playing a violent video game. ...read more.

Ballard and Wiest (1996) examined the effect of the level of video game violence. They found that male college students displayed more hostility and greater cardiovascular reaction after playing a violent game (Mortal Kombat) than after playing a non-violent control game. They also found that players displayed significantly greater hostility and cardiovascular reactivity after playing a more violent version of Mortal Kombat (the special effect of gushing blood was added to the basic fighting game) than after playing the same game without the added special effect. This indicates that level of game violence, and not simply game violence, is important to examine. Conversely, Scott (1995) failed to find an increase in hostile or aggressive affect as an effect of level of video game violence. However, rather than using one violent video game with increasing levels of violence, Scott (1995) employed two different video games that were assumed to represent varying degrees of violence. The loss of control in game type, graphics, and sound that was created by using more than one game to examine the effect of level of violence may have influenced the results of that study. Some parents rely on technology, restrictions or ratings to do their job. They protest film and television violence as if it were these industries' fault that their children are plopped in front of the television all day. Of course, ratings and technology do allow some parental control and would limit the need for censorship. Parents will be able to block objectionable programmes through state of the art technology. New standards have been adopted to equip televisions and computers with the V-chip. The chip will allow viewers to block shows based on their TV ratings for sexual content and violence as well as objectionable language. A 1996 law declared that televisions sold in the United States with screens that are at least thirteen inches must eventually contain built in blocking technology. ...read more.

Whether the media causes violence has been much researched and thoroughly debated. With there being, "A lot of controversy on the topic, as it is embraced by one study, rejected by another and largely left unanswerable by years of congressional inquiries." (No author-internet) However the connection between the two is seen to many scientists and psychiatrists as an established fact and no longer a point of debate. As Susan Villani (Psychiatrists), who has carefully reviewed the studies on this subject, states, "Clearly, with more exposure to media violence, children do become desensitised, they do copy what they see, and their values are shaped by it." (Sappenfield-internet) There are many, many studies that have been carried out all proving that violence on television leads to youth violence. For example a study carried out by the The American Academy of child and adolescent Psychiatry (AACAP) found that children who view violence on television may, "Become immune to the horror of violence; gradually accept violence as a way to solve problems; imitate violence they observe on television, and identify with certain characters, victims or victimizers." (No author-internet) The programme, 'Teenage Mutant Ninja turtles' was found to have a certain impact regarding this link with one example being where "A six year old boy wearing a turtle costume stabbed a friend in the arm for not returning a borrowed toy and a three year old boy picked up the family cat and swung it around his head like a turtle hero wielding a weapon. With him saying, "I'm just like Michelangelo."" (No author-internet) However Dennis Warton of the broadcasting industry is sceptical and says, "They spark a lot of interest but nothing definite comes out that can establish a direct link, many even say that data has been tortured to fit a theory." (Sappenfield-internet) In 1995 Newburn and Hagell concluded that, "Although well over 1,000 studies have been made, the case for a link between media violence and violent behaviour is 'not proven. ...read more.