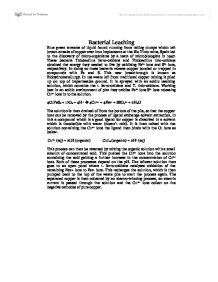 Bacterial Leaching Blue green streams of liquid found running from tailing dumps which left brown streaks of copper over iron implements at the Rio Tinto mine, Spain led to the discovery of micro-organisms by a team of microbiologists in 1947. These bacteria Thiobacillus ferro-oxidans and Thiobacillus thio-oxidans obtained the energy they needed to live by oxidising Fe2+ ions and S2- ions, respectively. In doing so these bacteria release copper bonded or trapped in compounds with Fe and S. This new breakthrough is known as Biohydrometallurgy. In use waste left from traditional copper mining is piled up on top of impermeable ground. It is sprayed with an acidic leaching solution, which contains the t. ferro-oxidans and T. thio-oxidans. Working best in an acidic environment of ph2 they oxidise Fe2+ ions S2- ions releasing Cu2+ ions in to the solution. 4CuFeS2 + 17O2 + 4H+ ==> 4Cu2+ + 4Fe3+ + 8SO42- + 2H2O The solution Is then drained of from the bottom of the pile, so that the copper ions can be removed by the process of ligand exchange solvent extraction, in this a compound which is a good ligand for copper is dissolved in a solvent which is immiscible with water (doesn't mix). ...read more.

The advantage of bacterial leaching is its price, it is a very cheap process when compared to traditional methods. Mining copper by the traditional method can cost between $130 and $200 per tonne, while bacterial leaching costs 70$ a tonne. It can obtain copper from ore of too low a percentage for traditional methods to be viable. It also makes use of waste dumps turning useless rock in to capital. This is used to great affect at Bingham canyon were 100 000 tonnes of waste is produced each day. The process of bacterial leaching is also a lot more friendly to the environment, a lot less energy is required, it makes use of polluting piles of waste and does not release sulphur dioxide in to the air unlike smelting which releases two tonnes of Sulphur dioxides for every tonne of copper. Bacterial leaching is used as a secondary process in the extraction of copper because the process is to slow and uneconomic because less money is made giving not enough return quick enough to make back the expenditure. ...read more.

as soluble compounds. The bacteria then catalyses the oxidation of the iron and arsenic. Leaving cyanidation to collect all the gold particles. Waste products from this process are then treated with hydrated calcium hydroxide, which neutralises the sulphuric acid and causes the precipitation of a gelatinous mixture of iron, arsenates and iron oxohydroxide. The bacterial process of extracting gold is used as a primary process (secondary process is the traditional method) because the research and technology has been developed to a high degree. It is more economic because more gold is produced so more money to be made. There is also a low cost of running the plants. Also the whole process is more feasible and economically competitive with the conventional process. For a new process to become commercial the government and political powers must approve and also regulate a new process and may need to provide funding in to research. The countries government would need to hold an enquiry into the effects of this new technology on the environment and population to check if it is mandatory and a viable safe method of production. Thus granting permission for the new technology to go ahead. ...read more.