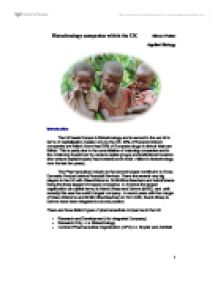 Biotechnology companies within the UK.

Biotechnology companies within the UK Simon Potter Applied Biology Introduction The UK leads Europe in Biotechnology and is second in the world in terms of capitalisation, beaten only by the US. 46% of Europe's biotech companies are British. More than 50% of European drugs in clinical trials are British. This is partly due to the consolidation of maturing companies and in the continuing investment by venture capital groups and institutional investors (the venture capital industry has invested some �344 million in biotechnology over the last ten years). The Pharmaceutical Industry is the second largest contributor to Gross Domestic Product behind Financial Services. There are several very big players in the UK with GlaxoWelcome, SmithKline Beecham and AstraZeneca being the three largest UK based companies. In America the largest organization (in capital terms) is Merck Sharp and Dohme (MSD), and until recently this was the world's largest company. In recent years with the merger of Glaxo Welcome and Smith Kline Beecham to form GSK, Merck Sharp & Dohme have been relegated to second position. There are three distinct types of pharmaceutical companies in the UK: * Research and Development (An Integrated Company) * Research Only - i.e. Biotechnology * Contract Pharmaceutical Organization (CPO) i.e. Snyder and Ashfield Problems faced by Biotech companies A recent Commission survey of private biotech companies and public research institutes reveals that 39% of the respondents have cancelled research projects on Genetically Modified Organisms (GMOs) over the last four years. The European Research Commissioner Philippe Busquin said, "In the private sector alone, 61% of respondents have cancelled research projects in this field. Furthermore, between 1998 and 2001, the number of notifications for GMO field trials in the EU declined by 76 %. Now that legitimate consumer and environmental concerns have been tackled by strict EU legislation, it is time to reverse this downward trend. If we do not react, we will be dependent on technology developed elsewhere in the world within the next ten years." ...read more.

Global Manufacturing and Supply (GMS) Biotechnology firms have other responsibilities as large successful companies in the aid of the developing world that are not just product based. GlaxoSmithKline, through its Global Community Partnerships team, works to support health and education initiatives in underserved communities throughout the world. In Europe, the focus is on improving children's health and to identify areas of need where Biotech firms can make a difference, and work with qualified organisations to build programmes that can be reproduced in communities with similar needs elsewhere. The emphasis is on bringing essential funding and effective management together so that company's assurances are translated into tangible benefits for communities. At the heart of it all, however, are people, and each programme tells a powerful story of how business, charitable organisations and communities can come together to make a real difference in people's lives: Project Hope, Bosnia - Project HOPE (Health Opportunities for People Everywhere) is a paediatric rehabilitation programme for children injured during the conflicts in Bosnia, Russia and the Ukraine. Barretstown, Ireland - Barretstown offers seriously ill children an environment to have fun, and develop self-confidence. Over 1,000 children attend each year from 21 countries around Europe. L'Envol- in France there is a similar program running which is more medical based; treatments such as chemotherapy. ? Mayenne -There is a project in place regarding the elimination of Lymphatic Filariasis Since 1998, GlaxoSmithKline has been working with the World Health Organization (WHO) on an ambitious health programme to eliminate the disease Lymphatic Filariasis (LF), also known as elephantiasis. This is a disabling and disfiguring parasitic disease that affects 120 million people in 73 countries. There aim is to donate sufficient quantities of our medicine albendazole for use in all lymphatic filariasis endemic countries for as long as it takes to eliminate the disease. They are also providing essential financial support to WHO and other organisations to enable implementation of treatment programmes in affected areas. By 2002, GlaxoSmithKline had already donated 100 million albendazole treatments as part of our commitment to eliminate Lymphatic Filariasis. ...read more.