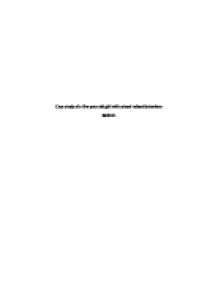 Case study of a five-year old girl with school refusal behaviour 0638141 Case description Mary, a five year old girl, had been attending her local nursery school successfully for several months. However, for the last four weeks she found it difficult to separate from her mother and refused to attend school so her case was referred to the school psychologist. Her mother and her nursery teacher agreed that her problem began when she had a disturbing dream during nap-time and became agitated when she woke up and realized her mother was not present. Everyday before going to school she began crying and requested not to attend. Subsequently, Mary was forced to attend school and when her mother dropped her to school her teacher had to hold on to her so her mother could leave the classroom. Although she was calm at times through the day she very often started crying and asked for her mother. At home, Mary did not separate from her mother and did not sleep in her own bed. Mary was described by school staff as a quiet child who liked to play alone. ...read more.

Mary's social and emotional functioning was assessed using the Devereux Behaviour rating Scales-School Form (Naglieri, LeBuffe & Pfeiffer, 1993), which was completed by her mother. This scale includes sub-scales for depression, physical symptoms or fears, interpersonal problems and inappropriate behaviours or feelings. Mary's Total Scale Score was in the "Very Significant" range. Mary was diagnosed with Separation Anxiety Disorder (SAD). She met the criteria for SAD described by the Diagnostic and Statistical Manual of Mental Disorders (American Psychiatric Association, 2000). The school psychologist made the diagnosis based on data collected from interviews with the mother and the school teacher. In addition, the data collected suggested that Mary's school refusal behaviour was motivated by attention-seeking purposes. Shaping, positive reinforcement and extinction were the selected approaches to treat Mary's school refusing behaviour associated with SAD. Mary's mother was taught a muscle relaxation technique with deep breathing that was to be practiced by Mary at bedtime to help her sleep and also to relax when she felt distressed during the day. They were also shown how to separate at the classroom door using adequate phrasing. ...read more.

The mother reported during weekly phone calls the greatest time intervals that Mary could be apart from her during the treatment period. The shaping procedure was considered successful when Mary was able to remain separated from her mother for intervals of twenty minutes as the perception of being away from a parent during this time was comparable to being away for longer periods for a five year old child. The treatment finished after three weeks of successful school attendance. Interviews with the mother and the teacher were conducted for the follow up at four months and twelve months after treatment. The mother reported that Mary was no longer shadowing her or becoming distress when separating at school and that she was also sleeping in her own bed. The teacher confirmed Mary was successfully attending school and was no longer asking for her mother or becoming distressed through the day. She also confirmed Mary and her mother separated in the way reported above. The mother also completed the DSF scale at four and twelve month follow-up and Mary obtain a Total Scale Score in the "normal" range. In addition, Mary did not meet the DSM criteria for SAD at both follow-up points. ...read more.