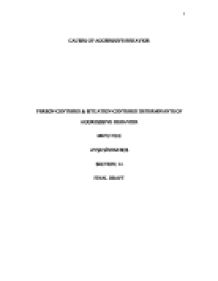 CAUSES OF AGGRESSIVE BEHAVIOR PERSON-CENTERED & SITUATION-CENTERED DETERMINANTS OF AGGRESSSIVE BEHAVIOR METU NCC AYSE SINEM BOS SECTION: 14 FINAL DRAFT CAUSES OF AGGRESSIVE BEHAVIOR It is almost impossible to spend a day without witnessing to some instances of aggressive behaviors in our daily life. Most people would agree that aggression is common in contemporary societies. For some, aggression can be experienced directly and intensely. For others, it can be experienced in a less harmful form, such as verbal insult or hostile rejection. Recent researches show an evidence for the surprising frequency of aggression among people. For example, according to Straus, Gelles and Steinmetz (1980; cited in Baron & Richardson, 1994), one of the three couple in The United State encounters the physical violence in their marriage. Moreover, sixty percent of children in United States die because of the parental abuse. As it can be seen from these dramatic statistics, aggression seems to be real and important part of the human life. In order to examine this significant issue, it is necessary to define what the aggression is. However, since it is a broad and comprehensive term, there are some major problems concerning the definition of aggression. Baron and Richardson (1994) ...read more.

For instance, they believe that they are more likely to win a fight or an argument. Since people with high self-esteem see themselves superior, they are more sensitive to threats to their superiority. When another person contradicts this view, they may react aggressively (Baumeister, Bushman & Campell, 2000). Although many research which provide little support this idea, further research is necessary to find out the direct evidence. The last person-centered determinant that brings about aggression is alcohol. Alcohol is seen as a person-centered factor because different levels of consumption cause individual differences in people's aggressive behavior. It is widely believed that some people become more aggressive when they consume alcohol. This idea is supported by the fact that violence is seen in bars and nightclubs frequently. This reveals a possible link between alcohol and aggression. There are many researches confirming the existence of such a link. Bushman and Cooper (1990) conducted 30 experiments and discovered that participants who consumed substantial amount of alcohol behaved more aggressively and respond to provocations strongly than those who did not consume alcohol. Although the reason why alcohol consumption increases aggression is not addressed, one possibility is that alcohol reduces the individuals' ability to process the information (Bushman, 1993, 1997; Bushman & Cooper, 1990; cited in Aronson, Wilson & Akert, 2007). ...read more.

The key factor in the association between aggression and social disadvantage is the extent to which a socially disadvantaged group has a sense of "relative deprivation" (Crisp & Turner, 2007). Relative deprivation can be related to the feeling that the chance of improving one's condition is very difficult. Therefore, since the improvement cannot be achieved legitimately, this deprived group or person can show aggression. There are some supports that relative deprivation is valid for some recent events in Europe. For instance, violence against Turkish immigrants increased in the eastern part of Germany, where unemployment level is still very high (Hogg & Vaughan, 2005). Based on this, it can be said that social disadvantage may contribute to occurrence of aggression. All in all, there are some people who are considered to be highly aggressive while others rarely show aggression signs even in the most insufferable circumstances. Although situational factors make some contributions to determine whether or not an individual display aggression in a certain situations, there are also individual differences in how aggressive people are in general. Aggression is commonplace in modern societies and it is an important issue that should be solved immediately. Wanting is not enough to stop it. In order to reduce the aggression in society, we should find out underlying reasons of aggression and violence. ...read more.