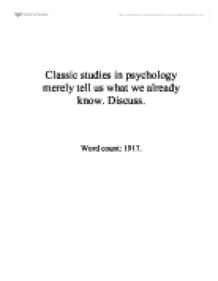 Classic studies in psychology merely tell us what we already know. Discuss

Classic studies in psychology merely tell us what we already know. Discuss. Word count: 1917. Classic studies in psychology merely tell us what we already knew. Discuss. So called 'classic' studies are dubbed such because of the high profile they have achieved, normally attributed to the influence the study has had or the contribution it has made to a specific area of psychology. Although no-one can dispute that some of these studies affected the way in which certain topics were approached and interpreted, whether they simply reiterated what we already knew is a subject open for discussion. It could be argued that it is sometimes other factors relating to the experiment, rather than the experiment itself, that magnetises the publicity and consequently the high profile. As these are the experiments that will be the most documented and those most referred to in general conversation and academic forums alike, it is easy to assume that they are responsible for the knowledge they represent, even if this is not exactly the true. It has been said that this is the case for Milgram's obedience study (1963). Milgram had led participants to believe they were participating in an experiment to do with memory and that they were required to 'shock' (although no shocks were actually given) another participant (who was in fact a confederate) with increasing intensity if they got a question wrong. The huge ethical implications of the study could have been enough to propel it into the media spotlight without the actual contribution to social psychology playing much part in the publicity, and therefore it may not have unearthed anything we didn't know previously. ...read more.

of the behaviour of the participants surpassed expectations, and therefore it did give new information as to the severity of the problem. The predominant view held before this experiment was conducted was that the reason prisoners and prison guards acted in the way they did because of the type of people likely to belong to each group as for example, prisoners will be such because they have committed a crime and therefore will be the type of person who will be deviant. This experiment disproved this, as these participants conformed to their roles as they do in real prisons, despite being randomly allocated and psychologically normal and healthy students. Therefore, it would appear that new information and a new insight was achieved by the study, despite the claim that the only reason for its high status is the reaction it received for being so unethical. However, even Zimbardo himself admits it is unlikely it could ever be repeated due to stricter ethical guidelines, so this could be one aspect of the study's popularity as it is, and will always be, the only authority on this particular topic. Bandura, Ross and Ross (1961) is another study that has been called a classic. This was one of the first experiments using a bobo doll to demonstrate the existence of vicarious or observational learning and involved 72 children, 36 male and 36 female aged from 37 to 69 months. These children were divided into 8 groups, with half being exposed to aggressive models and half non-aggressive models and divided further into male or female models. ...read more.

Therefore in this respect, the experiment does indeed give a lot of information and clarity to the topic that would not have otherwise been present. However, despite the arguments outlined above, Bandura still fails to offer an explanation of the underlying mechanisms behind the behaviour recorded. As with the Milgram study, it could be said that without this the information that the experiment produced is redundant as it simply elaborates on what has been discovered previously without trying to give detailed reasons for why it occurs, which some have argued is the point of psychology. In conclusion, due to the huge amount of publicity and acknowledgment classic studies in psychology receive, it is easy for them to be misinterpreted or for the results to be perceived as more groundbreaking than they actually are. Previous experiments have in some cases predicted the results found in such studies which could lead people to the opinion that they do simply reiterate what has already been discovered. However, in many cases such as Bandura et al (1961), this knowledge has been added to and this has made it possible to generalise the findings to situations not covered by this original research. Although certain of areas of psychology have been well investigated, sometimes it requires clarification or further support and some of the classic studies in psychology have served this purpose. Because of this, it is occasionally hard to ascertain if these studies do repeat the results found by the studies they are based on or if their contribution is sufficient for it to be deemed as new information, leaving the answer very much down to individual opinion. ...read more.