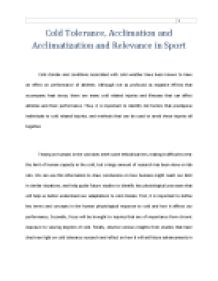 Cold Tolerance, Acclimation and Acclimatization and Relevance in Sport

﻿Cold Tolerance, Acclimation and Acclimatization and Relevance in Sport Cold climate and conditions associated with cold weather have been known to have an effect on performance of athletes. Although not as profound as negative effects that accompany heat stress, there are many cold related injuries and illnesses that can affect athletes and their performance. Thus, it is important to identify risk factors that predispose individuals to cold related injuries, and methods that can be used to avoid these injuries all together. Testing on humans in the cold does meet some ethical barriers, making it difficult to test the limit of human capacity in the cold, but a large amount of research has been done on lab rats. We can use this information to draw conclusions on how humans might reach our limit in similar situations, and help guide future studies to identify key physiological processes that will help us better understand our adaptations to cold climate. First, it is important to define key terms and concepts in the human physiological response to cold and how it affects our performance. Secondly, focus will be brought to injuries that are of importance from chronic exposure to varying degrees of cold. Finally, observe various insights from studies that have shed new light on cold tolerance research and reflect on how it will aid future advancements in the field of question. Review of Relevant Literature The Body?s Reaction to Cold Initially, it is important to get a good understanding of how the human body responds being introduced to a cold environment. ...read more.

(Blatteis et al., 1976). Cold-Related Injuries Majority of cold-related injuries are inclined to affect individuals who are genetically predisposed to them, but can still influence anyone exercising in the cold for long periods of time. The more relevant and concerning injuries relating to performance will be looked at in the following section. Asthma and Cold-Induced Bronchoconstriction Asthma is a condition characterized by inflammation and obstruction of the bronchi and bronchioles. Weiler and Ryan (2000) found that asthma rates of 60.7% for participants in Nordic skiing and short track speed-skating events, and 24% for those engaged in alpine skiing, long-track speed skating, figure skating, and snow boarding events. Shephard (2004) suggests that the ?freezing of the lungs? phenomenon, as claimed by mountaineers and residents of arctic areas seem to unclear, he states that it is certain that winter sport increases the risk of asthma to an extent that it is worth mentioning. Exercise induced bronchoconstriction or EIB, is known for is constriction of the bronchioles similar to asthma and is directly caused from stressing the respiratory pathways during intense aerobic exercise (Evans et al., 2005). EIB is known to be present in most individuals with asthma when they exercise, as EIB results in a decrease in forced expiratory volume of 10% or more over a one second maximal expiration (Mellion and Kobayashi, 1992). The cold air that enters the lungs stiffens and dries out the airways, only compounding the issue if the individual has asthma, but still remains a large problem if the individual is performing at high intensities. ...read more.

Next, in a close third place should be the group that was in severe cold climate. Finally, the unacclimated group will perform the worst coming in last place. Applying Knowledge to Support Hypothesis The logic behind the combined acclimated group coming in first is simply because as stated in the hypothesis will have an advantage and be more prepared than the other groups during multiple trials of runs. The group that would come in second place would be close, but would be the moderate cold group. This is because the habituated group would have a blunted shiver response and decreased vasoconstriction of the periphery meaning that they would have a greater efficiency of blood flow to skeletal muscle. Because of this however, they are at a greater risk of cold-related injury, but considering they are competing for better times, they will be going at high intensities ensuring that body temperature is maintained throughout the race. In third place is the metabolic and insulative acclimated group. The increase in metabolic heat production might help them to generate more energy early on during the race, but this could predispose them to fatigue earlier in the race. Also these athletes might not find a heightened shivering response to be very useful when they are constantly moving for the race, but they put up a good fight. Finally, the unacclimated group performed the worst simply because their bodies went into shock during the run and were be unable to adapt to the cold efficiently enough in time to catch up or to outperform any of their counterparts from other groups. ________________ Figures Figure 1: Eyolfson et al., 2001. Figure 2: Eyolfson et al., 2001. Figure 3: Castellani et al., 2006. Figure 4: Bruton et al. ...read more.