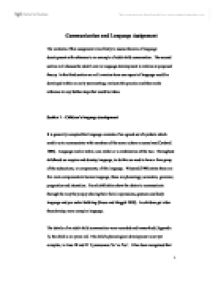 Communication and Language Assignment The contents of this assignment aims firstly to assess theories of language development with reference to an example of adult-child conversation. The second section will discuss the adult's role in language development in relation to proposed theory. In the third section we will examine how one aspect of language could be developed within an early years setting, evaluate this practice and then make reference to any further steps that could be taken. Section 1 - Children's language development It is generally accepted that language consists of an agreed set of symbols which enable us to communicate with members of the same culture as ourselves (Cardwell 1996). Language can be verbal, non-verbal or a combination of the two. Throughout childhood we acquire and develop language, to do this we need to have a firm grasp of the subsections, or components, of this language. Winyard (1996) states there are five main components to human language, these are phonology, semantics, grammar, pragmatics and intonation. From birth babies show the desire to communicate through the way they enjoy sharing their facial expressions, gestures and body language and pre-verbal babbling (Bruce and Meggitt 1999). As children get older they develop more complex language. The details of an adult-child conversation were recorded and transcribed (Appendix 1), the child is six years old. The child's phonological development is not yet complete, in lines 18 and 21 T pronounces 'br' as 'bw'. It has been recognised that until the age of six most children have difficulty pronouncing at least one phoneme (Flanagan 1994) and that children do not develop an entire range of speech sounds until they are seven years old (Hoff-Ginsberg 1997). T's use of semantics shows that he is fully aware of word meanings and is able to convey his message in a fairly adult like fashion. He also has the ability to understand what is being said to him. ...read more.

A plan of the activity can be seen in appendix 2. A transcript of the conversation that occurred during the activity can be seen in appendix 3. A play activity, involving toy versions of objects the children would have encountered the day before, was chosen because of the well documented evidence for children learning language through play. Blackburne (1997) emphasises the use of play as a means of learning language. She states evidence from Steiner schools across the country, whose emphasis is learning through play, showing children in these schools achieve higher in language tests than children of the same age in mainstream schooling. There are three main strategies that the adult uses to try to aid the children in talking about their experiences and to expand their language. The adult uses questioning as a means of discovering what the children could recall about the trip (line 8) and to assess how much language they have surrounding the topic (lines 2 and 21). This method was also used to keep the conversation on track and direct it where the adult wished (line 17). As a means of extending the children's language the adult models language (lines 27-28 and 38-39), and labels objects for the children (lines 19 and 31). As a way of general motivation the adult is seen to use some positive verbal reinforcement, as promoted by Skinner (lines 4 and 27). During the activity the children talk freely and easily about their visit. They are able to recount, and with help from the adult, sequence the processes of turning wheat into flour. They also attempt to grind their own flour using a pestle and mortar. They answer questions directed at them by the adult and talk around the subject among themselves. The children show they have a good range of vocabulary surrounding the visit and of rotation, we can see they mention almost all of suggested vocabulary in the activity plan (appendix 2). ...read more.

they went round and round and round.' A: 'What made them go round?' J: 'Water ...' [interrupted] D: '... a river made this big wheel go round like this' [spins hands around one another to motion the wheel] 15 J: 'Then they put the flour into bags for bread.' A: 'How did they collect the wheat from the fields? Can you remember?' D: 'They cut it with a big tractor with a thing on the back.' A: 'That's called a combine harvester.' J: [playing with windmill] 'Round and round, look!' 20 A: 'Yes, what's that called J?' J: 'A windmill, silly.' D: [Pulls the sleeve of the adults jumper] 'Then the tractor took it to the mill.' A: 'Can you see what this does?' [holds up pestle and mortar] 25 D: 'It makes those seeds [points to grains of wheat] into flour.' A: 'Yes. Those seeds are actually the grains of wheat that were cut down from the fields.' J: [taking the pestle and mortar from the adult] 'You bang it like this.' [begins to bang pestle into the mortar] 30 A: 'What happens if you use the pestle, this bit [shows J the pestle], to push the grains of wheat down hard?' J: [continues as shown for a couple of minutes, D watching eagerly] 'Flour! Look white flour at the bottom!' D: 'Where? Oooh!' 35 A: 'What did we have to do to make the flour then?' D: 'J squashed the wheat seeds with that bangy thing.' A: 'So J ground the grains of wheat until they split open and flour came out. Just like those big stones were doing at the mill.' D: 'Is there enough for a cake?' 40 A: 'I don't think so, maybe if we add some more wheat.' D: 'It's my turn' [snatches the pestle and mortar from J] A: 'What other things can you see on the table that goes round?' J: 'The windmill, and the wheels on the tractor.' D: 'There are wheels on my mums car, and on the bus.' 45 J: [singing] 'The wheels on the bus go round and round ...' 1 ...read more.