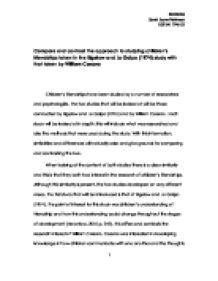 Compare and contrast the approach to studying children's friendships taken in the Bigelow and La Gaipa (1974) study with that taken by William Corsaro Children's friendships have been studied by a number of researchers and psychologists. The two studies that will be looked at will be those conducted by Bigelow and La Gaipa (1974) and by William Corsaro. Each study will be looked at in depth; this will include what was researched and also the methods that were used during the study. With this information, similarities and differences will naturally arise and give grounds for comparing and contrasting the two. When looking at the content of both studies there is a clear similarity and this is that they both had interest in the research of children's friendships. Although this similarity is present, the two studies developed on very different areas. The first study that will be introduced is that of Bigelow and La Gaipa (1974). The point of interest for this study was children's understanding of friendship and how this understanding could change throughout the stages of development (Brownlow, 2010 p. 242). This differs and contrasts the research interest of William Corsaro. Corsaro was interested in developing knowledge in how children communicate with one another and the thoughts of individual children as to the meaning of 'friendship' (Brownlow, 2010 p. 250). He stated that he wanted to, "try to gain insight in that way for what it is like to be a child from a child's perspective" (Interview with William Corsaro (2010). ...read more.

Through this method being used, Corsaro was able to produce rich and complex data as he was interacting with the children on their level so that they would feel relaxed and hopefully reduce the chance of the children not acting as they normally would around each other. The type of research method used determines what sort of evidence is collected. Looking back at Bigelow and La Gaipa's method, where written evidence was collected and then analysed, it would be said that the data collected was qualitative as it contained very detailed an personal thoughts on the research matter however the data then changed into quantitative as all the personal information wasn't used by the researchers only the words that had been pre-selected were counted (Brownlow, 2010 p. 242). This is different from the data that Corsaro collected. He used the information and evidence that he gained from talking as one of the children. With this in mind the evidence collected was of quantitative nature; he analysed each individual perspective that the data preserved. With both studies focusing on different methods, each study found different things from their research. Bigelow and La Gaipa (1974) discovered from the data that was collected that expectations of a best friend alter at different ages. This suggests that a child's image of a best friend must change as they grow older as they develop new thoughts and feelings that create complex needs and wants (Brownlow, 2010 p. ...read more.

The issue related to this could be that the expectations of the children asked to participate may be worlds apart from the expectations that Bigelow and La Gaipa expected to be important and with this points that may of been of importance could easily be passed by and go unnoticed (Brownlow, 2010 p. 246). There are a similar number of criticisms linked to Corsaro's study that applies to different aspects of the study. Corsaro himself noted that it can be hard to 'blend in' and if the adult is not accepted into the children's social world there is a chance that small but very important details may be missed so it is crucial that the transition from observer to being invited as part of a child's group is done correctly in order to obtain true evidence (Brownlow, 2010 p. 251). When taking these slow steps to gain acceptance, it is possible that the research period could take a long time, sometimes years (Brownlow, 2010 p. 250). This could create a criticism about the length of time needed to complete the study. It is apparent that the two studies have a varied amount of similarities and differences. The approach taken in each provided completely different information and varied results. With very little previous research into this area both studies have a similarity in the way that they have provided a basis for further investigation. Both studies with their different choices of research methods introduced interesting findings and scope to investigate further. ...read more.