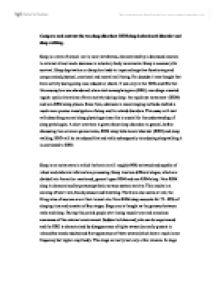 Compare and contrast the two sleep disorders REM sleep behavioural disorder and sleep walking. Sleep is a state of natural rest in most vertebrates, characterized by a decreased reaction to external stimuli and a decrease in voluntary body movements. Sleep is necessary for survival. Sleep deprivation or disruption leads to impaired cognitive functioning and compromised physical, emotional and mental well-being. For decades it was thought that brain activity during sleep was reduced or absent. It was only in the 1950s and 60s that this assumption was abandoned when electroencephalogram (EEG) recordings revealed regular cyclic alterations of brain activity during sleep: the rapid-eye movement- (REM) and non-REM sleep phases. Since then, advances in neuroimaging methods enabled a much more precise investigation of sleep and its related disorders. This essay will start with describing normal sleep physiology since this is crucial for the understanding of sleep pathologies. A short overview is given about sleep disorders in general, before discussing two common parasomnias, REM sleep behavioural disorder (RBD) and sleep walking. RBD will be introduced first and while subsequently introducing sleepwalking it is contrasted to RBD. Sleep is an active state in which the brain is still roughly 80% activated and capable of robust and elaborate information processing. Sleep involves different stages, which are divided into the earlier mentioned, general types REM and non-REM sleep. Non-REM sleep is characterized by parasympathetic nervous system activity. This results in a slowing of heart rate, blood pressure and breathing. The brain also seems at rest; the firing rates of neurons are at their lowest rate. Non-REM sleep accounts for 75- 80% of sleeping time and consists of four stages. Stage one is thought as the gateway between wake and sleep. During this period people start losing muscle tone and conscious awareness of the external environment. Sudden twitches and jerks can be experienced and the EEG is characterized by disappearance of alpha waves (normally present in relaxed but awake adults) ...read more.

The combination of heightened cerebral activity and muscular tonicity results in physically acting out dreams that involve excited and sometimes violent movement. People with RBD typically remember little nothing of this activity, unless they fall out of bed, bump into the furniture, or injure themselves and wake up. But they can usually remember and tell the dreams they were having during an episode. Dreams that involve violent or any other physical activity such as fighting, kicking, or running are more likely to trigger RBD activity (Schenck et al., 1986). It is argued that the pedunculopontine nucleus (PPN) in the upper brainstem is involved in the disruption of REM atonia since it has strong links with the REM generator and atonia circuitry (Shouse & Siegel, 1992). Studies in dogs have identified a co-localisation of the atonia and locomotor systems in the pons, which provides an anatomic basis for the simultaneous dysregulation of tonic and phasic motor systems in RBD (Lai & Siegel, 1990). Studies with cats in the 1960s showed that bilateral lesions of the caudal and ventral pons (pontine tegmentum) resulted in loss of muscle atonia and dream enactment (hallucinatory sleep). The cats showed aggression, fear and rage during sleep but not during wakefulness. The fact that the cats' behaviour after those lesions closely resembled that of patients with RBD further emphasized the link between the pons and muscle atonia. Further, the substantia nigra is closely connected to the REM generator circuitry and may play a major role in the genesis of PGO waves, which are a characteristic REM sleep event. Degeneration of substantia nigra and neuronal loss within the PPN were also found in patients with Parkinson's disease, which could explain the close link between PD and RBD (Jellinger, 1991, as cited in Schenck & Mahowald, 2002). The causes of RBD are still largely unknown. There is some evidence for a heritable component. ...read more.

If the patient was in REM sleep when getting up and moving around the diagnosis would be RBD. Further evidence is provided by the EMG, which should show muscle tension and the EOG, which should show rapid eye movements during the REM phase. In case of sleepwalking patients should have their active episode immediately following slow wave sleep. RBD is a treatable condition. Medication with clonazepam is effective in nearly 90% of patients (complete benefit in 79% of patients and partial benefit in another 11% of patients), with little evidence of tolerance or abuse (Uddin, 2007). However, due to the strong relationship of RBD with other neurodegenerative disorders therapists should consider that RBD symptoms are manifestations of these disorders. Therefore careful follow-up monitoring is requested. For sleepwalking treatment is very limited. It mainly involves creating a safe environment for the sleeper such as having little furniture in the bedroom and locking doors and windows. Conclusion Sleep is a state of rest which is necessary for survival. During sleep there is a cyclic change in brain activity between relaxed (non-REM) and highly active (REM) states. These cyclic changes are regulated by structures in the brain stem, thalamus and hypothalamus using different neurotransmitter systems. Abnormalities in these brain structures and neurotransmitter imbalances can lead to sleep disturbances known as parasomnias. Sleepwalking and RBD are two examples which may seem similar regarding their symptoms but differ substantially in their pathologies. The main distinction between them is that episodes are happening in different phases of sleep (in non-REM for sleepwalking and REM for RBD). For both, a heritable component is suggested but causes remain largely unknown. In addition to reports from patients and their partners about sleeping habits, polysomography is the most efficient tool for distinguishing between the two parasomnias. This distinction is not only important with regards to subsequent treatment. It also has significant implications for patients' future prognoses since RBD is a key indicator for neurodegenerative disorders, which can develop as much as 13 years after diagnosis of RBD. ...read more.