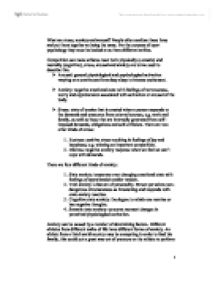 Competition can make athletes react both physically (somatic) and mentally (cognitive), stress, arousal and anxiety are terms use

What are stress, anxiety and arousal? People often confuse these three and put them together as being the same. For the purpose of sport psychology they must be looked at as three different entities. Competition can make athletes react both physically (somatic) and mentally (cognitive), stress, arousal and anxiety are terms used to describe this. > Arousal: general physiological and psychological activation varying on a continuum from deep sleep to intense excitement. > Anxiety: negative emotional state with feelings of nervousness, worry and apprehension associated with activation or arousal of the body. > Stress: state of tension that is created when a person responds to the demands and pressures from external sources, e.g. work and family, as well as those that are internally generated from self-imposed demands, obligations and self-criticism. There are two other kinds of stress: 1. Eustress: positive stress resulting in feelings of joy and happiness; e.g. winning an important competition. 2. Distress: negative anxiety response when we feel we can't cope with demands. There are four different kinds of anxiety: 1. State anxiety: temporary ever changing emotional state with feelings of apprehension and/or tension. 2. Trait anxiety: a feature of personality. Person perceives non-dangerous circumstances as threatening and responds with state anxiety reaction. 3. Cognitive state anxiety: the degree to which one worries or has negative thoughts. 4. Somatic state anxiety: concerns moment changes in perceived physiological activation. Anxiety can be caused by a number of determining factors. ...read more.

David Bedford was the Paula Radcliffe of 1972; there was a vast amount of pressure on him going into this race as the big 'British hope'. Having set three British records at three different distances he went into this race as a favourite. During the heats he looked like a medal hope but finished a disappointing 12th in the actual race. The Olympic heats were the Olympic debut of an unknown athlete by the name of Lasse Viren. Just before the halfway mark the 23 year old stumbled and fell, and it seemed like his chances of winning also fell. Traditionally if a runner falls during a race it has a catastrophic affect on the runner, but Viren got to his feet kept running and went on to break the world record as well. When Viren fell another athlete fell over the top of him, Mohamed Gammoudi. In complete contrast Gammoudi, 5000m gold medallist in 1968, gave up two laps after he fell, when a 100m gap had opened up between him and the front pack. In order to give you an idea of how big an achievement it is to get up and win a race after falling, it has been voted the no. 1 comeback of all time in the Observer. In the case of Lasse Viren I think his optimal level of arousal was higher than that of Mohamed Gammoudi and therefore his performance increased to his optimal level, whereas Gammoudi went into over arousal and therefore his performance decreased. ...read more.

> Long jumpers are also an example of personal performance routines in action; most of them stand before going down the runway and clap their hands in an effort to get the support of the crowd for their jump. > Jon Drummond: his personal performance routine used to annoy his fellow competitors; he would stand at the start of the race yelping, dancing and working the crowd. He once ran a relay race with a comb in his hair and after that he has a comb in possession while he races, he claimed that the Europeans went crazy when they saw him with his comb before a race. > Many cross country runners, and track athletes, crumple their number up before a race it is a good luck gesture. > Some runners even wear the same clothes for a race by way of superstition, one female runner from America, Jeannie Craig, always wears the same sports bra in competition because she has never had a stitch while wearing it, she also ties a four leaf clover charm to her trainers which was a gift from a fellow runner. Many runners have superstitions whether it be jumping on a hotel bed several times while at races away from home or keeping one sock rolled down during a race, these are ways of associating certain things with races that have brought them luck or certain things they have done just before they have won a race. Underlying is a list of the resources I used to compile this task: www.athleticinsight.com www.ranoakerunners.com/outdoorsrunning www.personal.psu.edu www.brianmac.demon.co.uk www.athletics-heroes.net www.keppleroncampus.com www.sportsmanagement.co.uk Sports management volume 8,2004 Observer.guardian.co.uk www.running.net ?? ?? ?? ?? 1 ...read more.