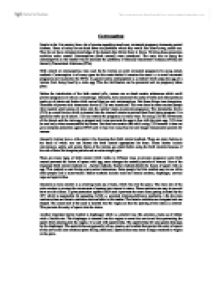 Contraceptives People in the 21st century face a lot of queries regarding unsafe sex, unwanted pregnancy increasing sexual diseases. Teens of today do not think about the problems which they would face after having unsafe sex. They do not have complete knowledge of the hazards that follow them in future. To bring these precarious activities under control Contraceptives (birth control) were introduced. The main aim to bring the contraceptives in the market was to eradicate the problems of Sexually transmitted Diseases (STDs) and Sexually Transmitted Infections (STIs). Birth control or contraceptives were used by the women to avoid unwanted pregnancy by using certain methods. Contraception is of many types but the motto behind it remains the same i.e. to avoid unwanted pregnancy and to prevent the STD's. In general terms contraception is a method which stops the egg of a women from being fused by a male egg. Thus the fertilization can be prevented and no pregnancy takes place. Before the introduction of the birth control pills, women ate or drank certain substances which could prevent pregnancy or induce a miscarriage. ...read more.

I think that the government should promote the idea of family planning otherwise the day is not far when the world would face crisis due to over crowding of people. Having more than one kid may also lead to bad health and food crisis etc. According to me the teenage pregnancy is due to the lack of proper sex education in institutions like school's colleges etc. Many times these undesired pregnancy may also happen due to lack of proper contraceptives or birth control method. According to my views a permanent solution for these sexual problems for the youngsters is that they not involve in such intercourse activities that would lead to pregnancy. This method is known as continues abstinence. This method is totally safe as there is no need of using any birth control methods or taking any oral contraception. This method prevents from STD's and STI's. Unlike the other birth control methods, this process proves to be extremely safe to the health. The females must know which days of the month would be the most effective days to get pregnant. ...read more.

To have a safe sexual life with the partner it is very necessary that both the partners are loyal to each other regarding their sex activities and sex life. The STD's could be very well avoided by not having many partners for sex. A person having sexual contacts with more than one person is more likely to get infected by STD's. This happens because the person might not know whether his partner is infected by any sexual disease or not. At such a point the use of contraceptive like condom proves to be very helpful. In conclusion, I think it is better to abstain from sex rather than indulge in it or use contraception to be on the safe side, emotional trauma and live in fear of catching STDs or other diseases. It is easy to have sex but after knowing of problems after having sex it does not seem such a good thing even with using various contraceptives. Abstinence till marriage and use of contraceptives to have a planned pregnancy make more sense to me. I am sure if more and more people are educated through various media about sex, contraceptives and their effectiveness they to would have responsible sex, healthier relationships, more joy in their lives. ...read more.