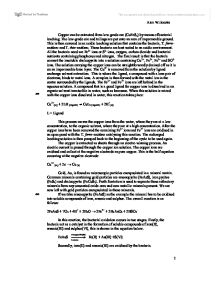 Copper can be extracted from low-grade ore (CuFeS2) by means of bacterial leaching.

Copper can be extracted from low-grade ore (CuFeS2) by means of bacterial leaching. The low-grade ore and tailings are put onto an area of impermeable ground. This is then covered in an acidic leeching solution that contains the bacteria, T. ferro-oxidans and T. thio-oxidans. These bacteria are best suited to an acidic environment. All the bacteria need are Fe2+ ions or S2- ions, oxygen, carbon dioxide and bacterial nutrients containing phosphorus and nitrogen. The final result is that the bacteria convert the insoluble chalcopyrite into a solution containing Cu2+, Fe2+, Fe3+ and SO2- ions. The solution carrying the copper ions can be straightforwardly drained off as it is on an impermeable base layer. The Cu2+ is removed from the solution by ligand exchange solvent extraction. This is where the ligand, a compound with a lone pair of electrons, binds to metal ions. A complex is then formed with the metal ion in the centre surrounded by the lignads. The Fe2+ and Fe3+ ions are left behind in the aqueous solution. ...read more.

Firstly, the bacteria act as a catalyst in the formation of soluble compounds of iron(II), arsenic(III) and sulphur(VI), this is shown in the equation below. FeAsS Fe(II) + As(III) +S(VI) Secondly, iron(II) and arsenic(III) are oxidised by the bacteria. Fe(II) Fe(III) As(III) As(V) During the whole bacterial oxidation of arsenopyrite, no gases are produced. The main products are iron(III), arsenic(V) and sulphuric acid(VI), which are all water-soluble. The gold has now been liberated from its ore. It now needs to be removed from the solution. This is done by cyanidation. Sodium cyanide is added to the solution. The gold and cyanide react to give complex gold cyanide. The gold is then precipitated from the aurocyanide by the addition of zinc dust, a more reactive metal. Pure gold is produced and is removed by smelting. By using bacterial leaching to extract copper from its ore rather than using traditional methods produces both advantages and disadvantages. The main advantages are that bacterial leaching does not produce any SO2 compared to smelting, which produces two tonnes of SO2 per one tonne of copper produced. ...read more.

takes a lot longer than the traditional method to produce the same amount of copper, so the delay in cash flow stops this being a viable solution to the mining companies needs. Using this method to extract gold from its ore is a primary process because the bacteria do nothing to hinder the process. They do not increase the time significantly; all they do is greatly increase the amount of gold produced. The development stages that a new mining process must pass before it can operate commercially are that it must be able to meet demand, the development must be fast enough to produce the metal so that the process is cost effective. It must be safe and not damage the environment. The main points of my report are as follows: * Detail the processes involved in using bacteria to liberate copper and gold from their ores * Outline the advantages and disadvantages of using bacterial leaching to extract copper and gold from their ores rather than traditional methods * Summarise the development stages a new mine must pass to operate commercially 1 ...read more.